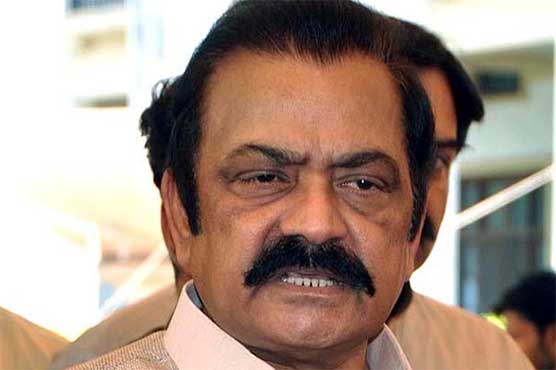 The ANF's prosecutor argued that Sanaullah's lawyers have been using delaying tactics.

LAHORE (Dunya News) – An anti-narcotics court on Saturday reserved its verdict in a plea filed by PML-N MNA and former Punjab law minister Rana Sanaullah for release of his vehicle and provision of footages allegedly possessed by the Anti-Narcotics Force (ANF) as evidence, and adjourned the hearing till February 8 in a narcotics case.

As the hearing resumed, the ANF’s prosecutor argued that Sanaullah’s lawyers have been using delaying tactics, and pleaded with the court to conduct proceedings of the case on a daily basis.

To this, judge Shakir Hassan asked the prosecutor, “How could I hear the case on a daily basis? I postpone the cases daily, I don’t have a stenographer and the car in which I travel is a “third-class” car […] all these works are to be done by the ministry of law and justice and you are saying to hold hearings daily.”

“Both sides have completed their arguments […] I am reserving my judgment in the application, the decision will be written when my stenographer arrives,” the judge added.

After appearing in the courtroom, the PML-N leader spoke to the media and claimed that false and baseless case was lodged against him, and urged Minister for States and Frontier Regions (Safron) and Narcotics Control Shehryar Afridi to justify his stance in the court.

“The government has no future [we will] get rid of this government in the year 2020,” Sanaullah stated, adding the opposition was being kept busy in order to divert attention from the public issues.

The PML-N leader further pointed out that the rising inflation in the country has made it harder for the public to buy food for even two times a day.

“An action plan will be made in the opposition’s joint meeting […] a strong protest will be held for public issues,” he mentioned.

The minister claimed that baseless cases were being lodged against the opposition to “keep it busy” while this was now clear that he was being subject to political victimisation.

“The person arrested from Faisalabad should be brought forth […] Shehryar Afridi stated in the parliament that he and the prime minister had made no conspiracy, [and so] present the arrested persons before the court,” he went on to say, adding that he would seek the court to summon Afridi and the ANF’s DG in the same case.

Besides, the ANF on Wednesday sought permission from the Supreme Court to take Sanaullah into custody through a petition challenging the grant of bail to him by the Lahore High Court (LHC).

On Dec 23, 2019, the LHC had ordered the release of the PML-N leader against two surety bonds of Rs1 million each in the same case.

The PML-N had filed his first post-arrest bail petition in a special court on Aug 8, which was dismissed on Sept 20, 2019.

Sanaullah was arres¬ted by the ANF from a picket near Ravi tool plaza on Lahore Motorway in July last year for allegedly possessing 15 kilograms of heroin.

The FIR was lodged under section 9 (C) of Control of Narcotic Substances Act 1997, which carries death penalty or life imprisonment or a jail-term that may extend to 14 years along with a fine up to Rs1 million.

Importantly, the NAB Lahore yesterday issued notice to Sanaullah to appear before its investigation team on February 3 in a assets beyond income case.