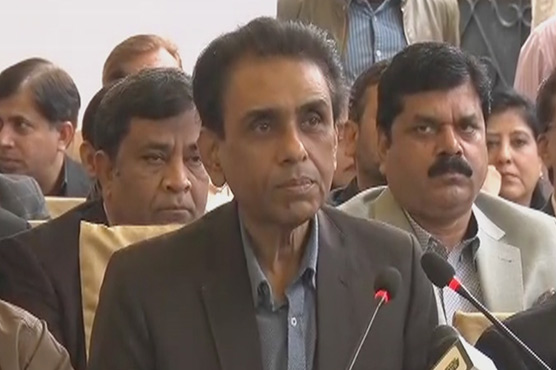 The announcement was made in a press conference held by the party members in Karachi.

While holding a press conference in Karachi, the MQM-P leader stated, however, the party would continue to coordinate with the government.

“We had facilitated the formation of this PTI government, and we are not stepping back from our support to this government […] but under these circumstances, it is not possible for me to sit in the ministership,” he said.

Mr Siddiqi asserted that his party would continue to support the democratic process, however, lamented that his sitting in the federal cabinet was “useless”.

"The lack of seriousness on these matters left us no choice," he said, adding that MQM-P’s Rabita Committee (Coordination Committee) had held a detailed discussion on Friday after which they had concluded that it was useless for him to hold the minister’s post.

“We had asked for two ministries, one of which is still being sought from the government,” Mr Siddiqi stated.

“We hadn’t ask for the law ministry, and the two names [referred to the government] did not include Farogh Naseem’s name [as the Federal Minister of Law and Justice],” he regretted.

The MQM-P leader recalled that “contracts” were signed between his party and the PTI government in the presence of Jahangir Khan Tareen at Bani Gala in Islamabad, and Bahadurabad in Karachi.

Mr Siddiqi reiterated that outstanding issues of Sindh’s urban areas were not being resolved, and that after 16-17 months, not even one point regarding the conditions in Sindh had seen progress.

"At this point, it becomes difficult for me to remain in the government, that I [continue to] hold a minister’s position, and people in Sindh continue to face the conditions they did before we joined the [federal] government." "We have fulfilled our promise and intend to fulfil our promise," he said.

However, he asked that if the city was subjected to unjust treatment, then to what extent his party would be able to cooperate.

He pointed out that for the metropolitan city of Karachi that generates thousands of billions of rupees, not even one billion rupees were being released.

“We can collect one billion even by collecting donations […] at first [the government] seemed inexperience, but now it is exhibiting lack of seriousness,” he added.

Mr Siddiqi further mentioned that a year and a half was not a short span of time for waiting, and regretted that they needed to recall it in every meeting what was decided between his party and the government.

“We are giving this an opportunity to the government for proving themselves to the people of Karachi and Sindh that the prime minister and the president also belong to them,” he asserted.

“Ministries were also offered from somewhere else, but today’s announcement has nothing to do with that offer,” he added. “MQM-P at the moment is passing through a new phase.”

After his announcement, while responding to a question posed by a journalist regarding whether he had already submitted his resignation to the prime minister or the federal cabinet, Siddiqui said: "We have informed you first and through you [the media] we have taken the general public into confidence. We will then complete the rest of the steps."