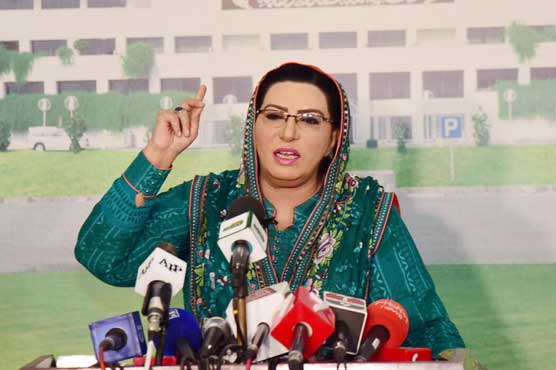 "The ANF has nothing to do with political ambitions and affairs," said Awan.

ISLAMABAD (Dunya News) - Special Assistant to Prime Minister on Information and Broadcasting Dr. Firdous Ashiq Awan said that a media campaign was launched to malign a brave national institution such as the Anti-Narcotics Force (ANF).

In a brief talk to media after cabinet meeting, Firdous Ashiq expressed that the national institution which fights wars for the country was tried to be exploited. “The ANF has nothing to do with political ambitions and affairs,” she added.

Dr Awan asserted that there used to be a tradition in Pakistan where no powerful person was caught before. She further said that ANF is a national body and it plays a vital role. “If the government does not strengthen the institutions of the country then their existence will be in danger,” she said, adding that ANF should play its role in accordance with law and constitution.

Meanwhile, ANF DG of Rana Sanaullah narcotics case was summoned in the meeting where he presented all the facts to the cabinet and explained everything related to the case.

She went on to say that it was the father of Pakistan Muslim League-Nawaz (PML-N) leader Abid Sher Ali who accused Rana Sanaullah in the first place for having assets beyond his means.

Earlier, pecial Assistant to the Prime Minister (SAPM) on Information and Broadcasting Dr. Firdous Ashiq Awan Tuesday said people have given Pakistan Tehreek-e-Insaf (PTI) mandate and it will solve public problems in collaboration with its allies.

In a series of tweets, the SAPM said political opponents of the government are in search of back door after failing before the people as well as in politics, and are trying to break in politically.

The Special Assistant said Bilawal Bhutto Zardari must realize that the problems of Karachi will be resolved by discontinuing corruption, looting and kickbacks instead of manipulating against alliance of a political party.

She said the real problem of Karachi is that a corrupt group has been ruling there for a decade and as long as it persists, the problems of Sindh and Karachi will not be solved.

She said Bilawal Bhutto Zardari will have to prove through real democratic attitude that he is heir to the public politics of Zulfikar Ali Bhutto and Benazir Bhutto Shaheed.