Special court verdict against Musharraf is beyond country's constitution and values: MQM-P chief 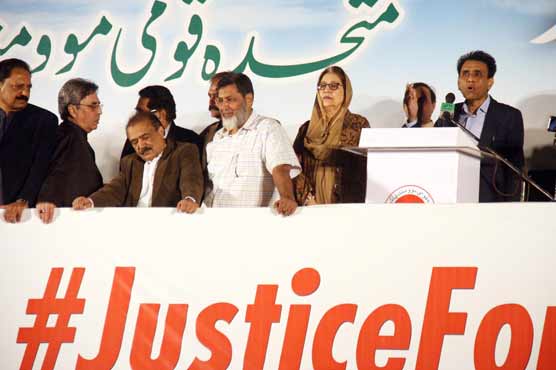 Special court verdict against Musharraf is beyond country's constitution and values: MQM-P chief

The MQM-P leader said that they firmly believe that the apex courts will do justice.

Addressing a rally taken out in favor of former president Pervez Musharraf on Sunday, he said that how could this be possible that 1999’s decision was right and 2007’s decision was wrong.

The MQM-P leader said that they firmly believe that the apex courts will do justice. “The courts are recognized by their verdicts. We will continue to respect the judiciary,” he said.

Khalid Maqbool Siddiqui while terming the former president “Mohsin-e-Pakistan” said that he served the country for 40 years. “We dream of Pakistan where no one should be termed a traitor for speaking truth,” he said.

On the other hand, party’s Senior Deputy Convener Amir Khan said that calling such a general a traitor reflected “a shameful and vengeful mind-set”.

Meanwhile, Karachi mayor Waseem Akhtar said that the confidence of the demonstrators showed that the public had made its decision. “We too are against the violation of law, but Article 6 should be used correctly,” he said. “The violator should not be the only one punished; rather, everyone involved in the violation should be tried.”