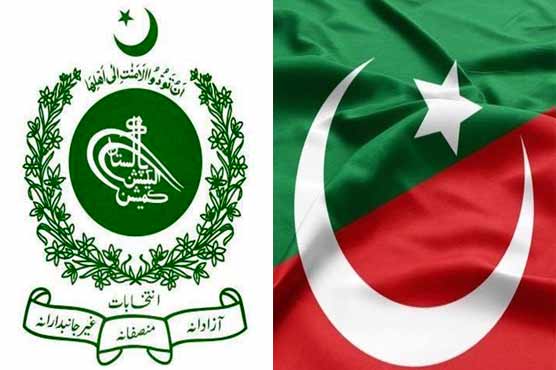 Yesterday, members of the joint opposition's Rehbar Committee lodged protest in front of the ECP.

ISLAMABAD (Dunya News) – The Election Commission of Pakistan (ECP) has accepted opposition’s application to conduct the proceedings in the foreign funding case against the Pakistan Tehreek-i-Insaf (PTI) on a daily basis from November 26 onwards.

Yesterday, members of the joint opposition’s Rehbar Committee lodged protest in front of the ECP with the demand to conduct daily hearings in the case, and subsequently submitted an application, pleading with the ECP to decide the case before the expiry of the chief election commissioner’s term next month.

In the absence of the Chief Election Commission (CEC) Sardar Muhammad Raza Khan, two members of the ECP presided over the hearing and accepted the application.

The application pointed out that the foreign funding case against the PTI had been pending with the ECP for the past five years, while all relevant documents were available for proceedings.

“We urge that in the interest of justice the case may be heard on a daily basis and decided at the earliest during the term of the CEC,” it stated.

Yesterday, while talking to the media in front of the ECP, Rehbar Committee chief Akram Durrani said: “It is the demand of all political parties that the hearings of the case should be done on a daily basis.”

“Today, nine members of the opposition’s Rehbar Committee have come to file an application with the Chief Election Commissioner […] we have come here with great hope as when the verdict in this case is announced, the whole PTI will vanish,” he said, adding that the government would be sent packing.

“For god’s sake, wind-up the foreign funding case as soon as possible […] the delay in this case is damaging for the country,” he added.

On Oct. 10, the ECP rejected four application filed by PTI seeking secrecy in the scrutiny of the foreign funding case against the party.

It directed a special scrutiny committee to continue its investigation into the same case.

In a previous hearing on Oct. 1, the ECP bench had reserved its verdict on PTI’s applications after listening to the arguments of the various parties to the case. The hearing was resumed after 18 months.

A three-member bench headed by CEC Sardar Muhammad Raza Khan had examined a report concluded by the scrutiny committee and had adjourned the hearing till Oct. 10.

To this, the CEC had responded: “What has happened to you in the last five and a half years for you are complaining about mala fide intention? […] what the committee had to do with information being shared on media?”

Applicant’s advocate Ahmad Hassan had told the bench that the State Bank of Pakistan (SBP) had handed over the details of 23 accounts owned by the PTI, and in every meeting, the party had its representative to place forward its stance.