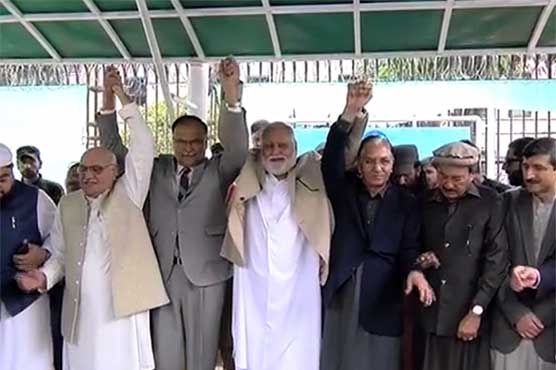 The decision of holding the protest was taken during yesterday's meeting of the Rehbar Committee.

ISLAMABAD (Dunya News) – Members of the joint opposition’s Rehbar Committee on Wednesday lodged protest in front of the Election Commission of Pakistan (ECP) with a demand to conduct the proceedings in the foreign funding case against the Pakistan Tehreek-i-Insaf (PTI) on a daily basis.

While talking to the media in front of the ECP, Rehbar Committee chief Akram Durrani said: “It is the demand of all political parties that the hearings of the case should be done on a daily basis.”

“Today, nine members of the opposition’s Rehbar Committee have come to file an application with the Chief Election Commissioner […] we have come here with great hope as when the verdict in this case is announced, the whole PTI will vanish,” he said, adding that the government would be sent packing.

“For god’s sake, wind-up the foreign funding case as soon as possible […] the delay in this case is damaging for the country,” he added.

“The verdict of this case will remove all filth […] today we will write a reminder letter to the Chief Election Commission (CEC) [for this purpose],” he mentioned.

“We plead with the election commission that why the one, who has been talking of Riyasat-e-Madina, has been escaping from accountability […] the case regarding foreign funding is pending for five years,” he pointed out.

Pakistan Peoples Party (PPP) leader Nayyar Hussain Bukhari also lashed out at the premier, and said: “[You] talk about scrutiny of others and resist your own […] if you are not a thief, then what hinders you from it.”

“This case has been filed by those who had played a role in forming the PTI […] the nation has been demanding for your accountability,” he stated.

The decision of holding the protest was taken during yesterday’s meeting of the Rehbar Committee.

On Oct. 10, the ECP rejected four application filed by PTI seeking secrecy in the scrutiny of the foreign funding case against the party.

It directed a special scrutiny committee to continue its investigation into the same case and has ordered the concerned parties, including the PTI, to appear before the committee on Oct. 14.

In a previous hearing on Oct. 1, the ECP bench had reserved its verdict on PTI’s applications after listening to the arguments of the various parties to the case. The hearing was resumed after 18 months.

A three-member bench headed by Chief Election Commission (CEC) Sardar Muhammad Raza Khan had examined a report concluded by the scrutiny committee and had adjourned the hearing till Oct. 10.

To this, the CEC responded: “What has happened to you in the last five and a half years for you are complaining about mala fide intention? […] what the committee had to do with information being shared on media?”

Applicant’s advocate Ahmad Hassan told the bench that the State Bank of Pakistan (SBP) had handed over the details of 23 accounts owned by the PTI, and in every meeting, the party had its representative to place forward its stance.

Earlier, the Pakistan Muslim League-Nawaz (PML-N) had decided to file a new party funding case with the ECP against the ruling party.

In an application submitted by the PML-N, it sought complete details of bank accounts held by the PTI from the years 2013 to 2018.

For scrutiny of foreign funding to the ruling PTI, PML-N Member of the National Assembly (MNA) Mohsin Shahnawaz Ranjha had stated that his party would not become a party to the case lodged by Akbar S Babar in November, 2014, after he had developed differences with the PTI.

“We will file a separate case against the PTI,” he said.

It is important to note that in the case already being heard by the ECP, the scrutiny of PTI’s foreign funding sources is being done till the year 2013, whereas the PML-N sought increasing the scope of investigation till 2018.