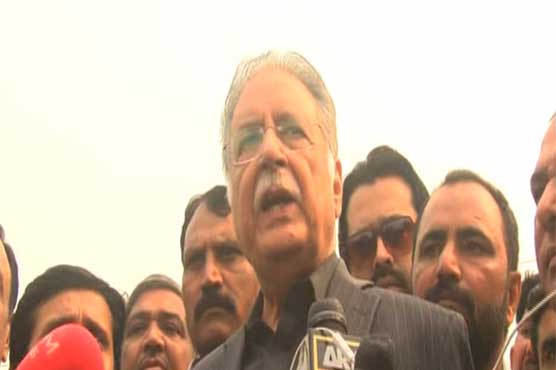 Rashid spoke to the media after seeing off Sharif at Allama Iqbal International Airport in Lahore.

LAHORE (Dunya News) – Pakistan Muslim League-Nawaz (PML-N) senior politician Pervez Rashid on Tuesday refuted speculations on the media that any deal was struck between the party and the government for the release of former premier Nawaz Sharif and removal of his name from the Exit Control List (ECL) for travelling abroad.

Rashid spoke to the media after seeing off Sharif at Allama Iqbal International Airport in Lahore, and stated that Sharif had returned to Pakistan on his own to face cases against him.

“He will return back to the country after rehabilitation and will continue his struggle for the rule of the general public,” he said.

“The court allowed Nawaz Sharif to travel abroad […] the prime minister has also refuted that deal [has been made],” he added.

For Pakistan Peoples Party (PPP) co-chairman Asif Ali Zardari, Rashid said he must also receive same treatment that the former president deserves. “We cannot comprehend why he was arrested.”

Another PML-N leader Khurram Dastagir stated that Sharif’s disease could not be identified and his health was even bad today.

“Doctors examined his health prior to departure […] after his health improves, he will return back for continuing his struggle for the rule of people,” he said.

PML-N leader and former premier Shahid Khaqan Abbasi asserted that Sharif was abroad and came back and served jail.

“Now he is going again for treatment and will return back […] relief isn’t granted in this way,” he said, adding that federal ministers were incompetent and even if they were replaced, no change would be observed.