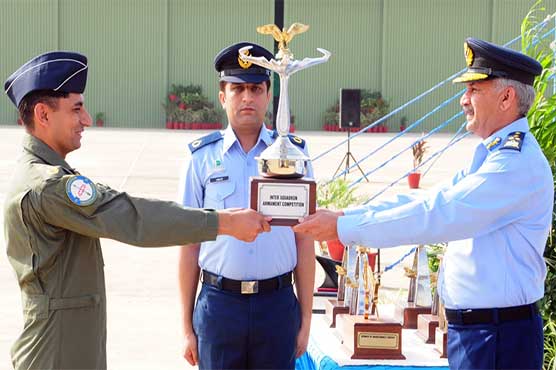 The closing ceremony of this most anticipated contest was held at an Operational Air Base, says a press release of Pakistan Air Force (PAF) issued here on Wednesday.

Addressing on the occasion, the Air chief said PAF places highest premium on self-reliance through indigenization alongside modernization and expansion of existing combat capabilities.

He said PAF stands ever ready for the aerial defence of motherland and has always responded to nation’s call with full valour and commitment.

Highlighting the Kashmir situation, he said, “we stand by our Kashmiri brethren in their just struggle for self-determination and reiterated that the human atrocities must end immediately.”

He further said, “We are fully alive to the situation and cannot lower our guards.”

The competition, which commenced on October 10, saw PAF fighter pilots from all weapon systems exhibiting highest level of professionalism through pinpoint weapon delivery. After a close competition, No 11 Multirole Squadron achieved highest score and was declared the winner of Inter Squadron Armament Trophy.

First time introduced Best Armament Trophy (BAT) was shared by No 2 Squadron and No 8 Squadron, while No 14 Squadron won the Maintenance Trophy. Wing Commander Noman Akram was awarded the coveted Sher Afgan Trophy for being the best marksman in the competition.

All PAF Fighter Squadrons were evaluated for operational readiness and weapon system performance under competitive environment. The main highlight of the competition was exceptional performance by the JF-17 Thunder aircraft and it reaffirmed its position as the front line fighter of the PAF.