Here is how people reacted on Twitter after 5.8 earthquake ratlled parts of Pakistan 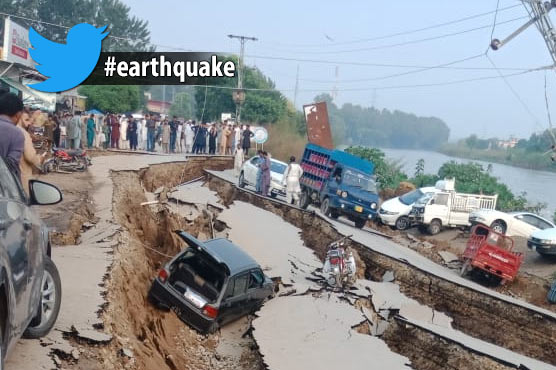 Here is how people reacted on Twitter after 5.8 earthquake ratlled parts of Pakistan

People are sharing their thoughts through the hashtag 'earthquake' on Twitter.

(Web Desk) – A strong 5.8 magnitude earthquake rocked the capital and other parts of the country on Tuesday afternoon with people taking to the social networking website Twitter to share their experiences through the hashtag ‘earthquake’.

Just minutes after the tremors, ‘earthquake’ started trending on Twitter in Pakistan with people inquiring after one another, sharing pictures and videos of the tremors that jolted various parts of Pakistan.

Here are some tweets:

We hope that you all are safe
May Allah keep everyone safe #Earthquake pic.twitter.com/j7jk8WppVD

These are the images from Azad Kashmir, but we dont know what happened at occupied Kashmir, as there s no internet, no communication. Things would have gone wrong there as well, but we know nothing. Oh God, save those people! #Kashmir #Earthquake https://t.co/SlJHKLL7Vs

Tips on how to respond to an #earthquake Stay safe pic.twitter.com/BenRHe2uvz

I think it was the 1st time an earthquake occurred from this epicentre. The low depth made this earthquake more frightening.
Stay safe. #earthquake pic.twitter.com/a4EeUpGZgJ