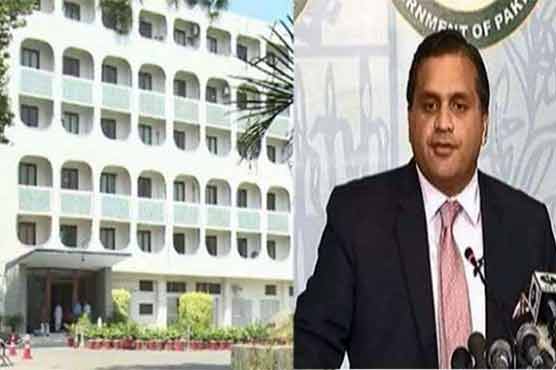 ISLAMABAD (Dunya News) - Pakistan on Saturday summoned Indian envoy and condemned the unprovoked ceasefire violations by the Indian occupation forces along the Line of Control (LoC).

In the most recent ceasefire violations by the Indian forces on 14 September 2019 in Nikial and Jandrot Sectors of the LoC, targeting innocent civilians, an innocent woman Fatima Bibi, 40 years old, resident of Village Balakot, embraced shahadat while seven others, including women sustained serious injuries.

The Indian occupation forces along the LoC and Working boundary have continuously been targeting civilian populated areas with artillery fire, heavy-caliber mortars, and automatic weapons, which still continues. This unprecedented escalation in ceasefire violations by India is continuing from the year 2017 when the Indian forces committed 1970 ceasefire violations.

Dr Faisal said Afghanistan must make its border secure so that such incidents could be avoided in future.

Four Pakistani soldiers embraced martyrdom while another soldier sustained injuries in two separate incidents of firing by militants on the western border, the Inter-Services Public Relations (ISPR) stated on Saturday.

According to a statement issued by ISPR Director General (DG) Major General Asif Ghafoor further revealed that two militants were shot dead in response by the military.