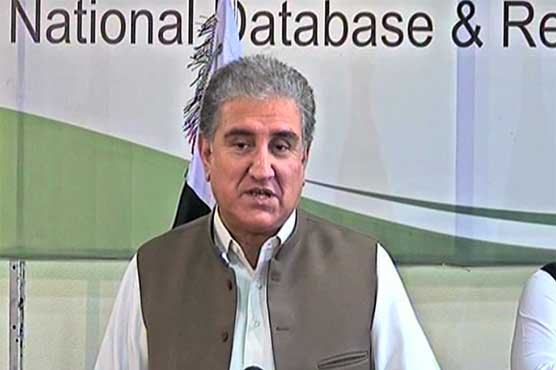 He outlined gross human rights' violations and atrocities in the region by Indian occupation forces.

Talking to the media in Islamabad, he said the PM would also hold bilateral meetings and attend other events in New York on the sidelines of UNGA session.

He asserted that the final decision about closure of Pakistan’s airspace for India has not been taken yet and the matter would be decided after consultation.

The foreign minister acknowledged that under Shimla agreement, both Pakistan and India were bound to bilaterally resolve Kashmir dispute. He, however, said Modi must respond to the international community whether his 5th August’s measures were bilateral or unilateral in nature. “It is the Indian Prime Minister [Narendra Modi] who has undermined the spirit of bilateralism.

“Even police [of occupied Kashmir] have been hesitating from coordinating [over the prevailing situation],” he said while referring to intense clampdown by Indian occupation forces in the Himalayan region since August 5 when Modi-led Indian government abrogated articles 370 and 35A of its Constitution.

Mr Qureshi maintained that the unilateral steps in occupied Kashmir were in total breach of UN Security Council resolutions and the International Law.

He pointed out that 14 petitions have been filed in the Indian Supreme Court against these illegal steps. He said it would be the test of the Indian apex court whether it would give the judgement independently or submit to Modi’s pressure.

“Majority of the policemen in occupied Kashmir are Muslims […] weapons have been taken back from them,” he remarked.

He outlined gross human rights’ violations and atrocities in the region and said that people have been facing acute shortage of essential commodities including food and medicines. “Kashmiri people are not being allowed to offer their Friday prayers.”

Mr Qureshi further asked if the Indian government would allow boxer Amir Khan to visit occupied Kashmir as Pakistan did yesterday when Khan roamed over the entire Azad Kashmir.

“Indian soldiers are standing in front of every home in occupied Kashmir […] India is responsible for destabilising the region.

He said the world community was not oblivious to the situation in occupied valley. He said the public opinion on Kashmir dispute has been changing at the international forums. He said Pakistani and Kashmiri community abroad has been holding demonstrations against the atrocities and persecution of Muslims. He said our community in London would stage a massive protest in the coming days.

Responding to a question, Mr Qureshi said: “Pakistan is grateful to Iran for coming up with a strong stance in support of the oppressed Kashmiri people.”

Earlier, the minister held a meeting with NADRA Chairman Usman Yousaf Mobin and discussed a proposal to facilitate the overseas Pakistanis.