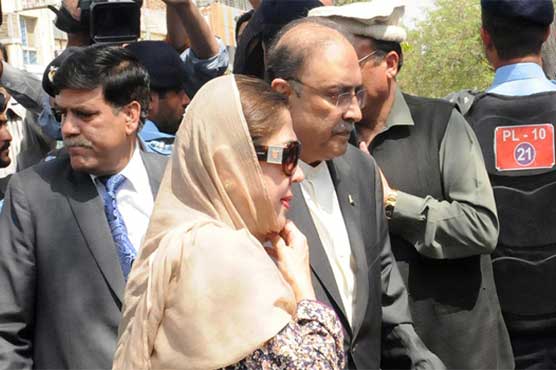 As hearing of the references resumed, former president Asif Ali Zardari and his sibling Faryal Talpur appeared before the court.

Park Lane reference’s copies were given to 11 accused persons, while copies could not be provided to other six suspects in the case.

Advocate Lateef Khosa argued that despite of the National Accountability Bureau’s (NAB) assertion, copies were not provided.

Judge Muhammad Bashir issued order for the bureau’s chairman to ensure provision of copies to all accused persons.

“I’m ordering to provide copies in the next hearing […] it will be quicker if the matter is directed to the chairman of the NAB,” the judge said, adding: “Whatever case has been transferred to this court is the only reference.”

To this, NAB prosecutor Muzaffar Abbasi said that the bureau would file a supplementary reference under the Money Laundering reference.

Moreover, Zardari and Talpur’s applications seeking facilities in their prison cells will be heard tomorrow in the court.