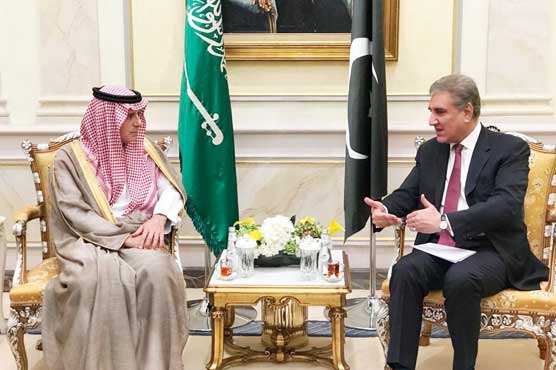 Pakistan will stand by Saudia in case of any threat to sanctity or security of Harmain Shareefain.

The Foreign Minister vowed that Pakistan will stand by Saudi Arabia in case of any threat to sanctity or security of Harmain Shareefain.

Shah Mahmood Qureshi gave this assurance to his Saudi counterpart Dr. Ibrahim bin Abdulaziz Al-Assaf during a special meeting on the sidelines of OIC Council of Foreign Ministers  meeting in Makkah.

He said the announcement by crown prince to release 2107 Pakistani prisoners incarcerated in various jails of the kingdom won the hearts of people. He impressed upon his Saudi counterpart to take immediate steps for their release to materialize.

Foreign Minister while appreciating the mediatory role of Saudi Arabia during Pak India tensions following the Pulwama incident made it clear that participation of India in the OIC is not acceptable in any capacity.

He also sought the attention of his Saudi counterpart over issues faced by Pakistani workforce and students in Saudi Arabia.