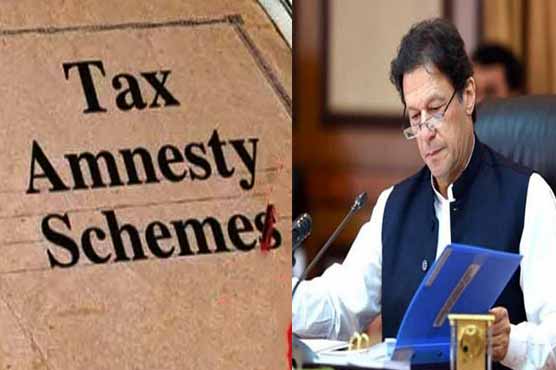 Sources said that Amnesty Scheme can be brought under presidential ordinance.

As per details, draft for Assets Declaration Ordinance 2019 was presented in the meeting for approval. However, final announcement regarding Tax Amnesty Scheme will be made soon.

According to documents available with Dunya News, the first stage of scheme would be completed in current fiscal year at the end of June.

During this time, 5% tax on benami assets would be imposed on the individuals whereas they will pay 10% tax till September 30 to legalize their illegal assets.

The final stage of the scheme will end on December 31, 2019. Individuals can legalize their property by paying 1% tax till June 2019 while 2% tax would be imposed till September 30 and 4% till December 31 on citizens to clear their property.

Moreover, 3% tax would be imposed on the citizens to declare their undeclared sales.

Those who took charge of government offices after 2000 will not get benefit with this scheme.

The members also discussed monthly inflation rate and price control measures for essential commodities, steps taken for improvements in the educational system of the country, counselor policy for the assistance of imprisoned Pakistanis and appointment of judges in special courts of Karachi and Quetta.

A summary for extension of Regular Public Transport (RPT), charter, aerial work licence of Pakistan International Airlines (PIA) was also presented before the cabinet for its approval.

The government sought exemption of equipment donated by narcotics control of China to Pakistan, whereas, a Memorandum of Understanding (MoU) was also approved between National School of Public Policy (NSPP) and National Management Institute (NMI) of Egypt.