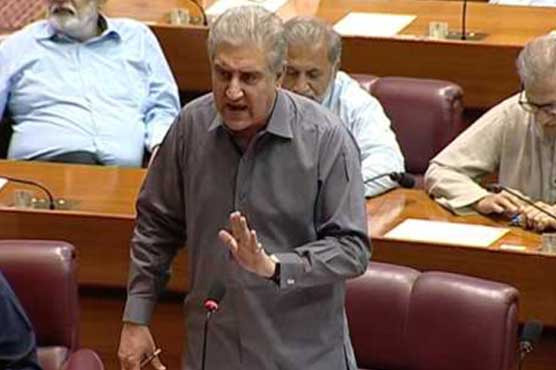 He maintained that no compromise would be made on the national interest of the country.

ISLAMABAD (Dunya News) – Foreign Minister Shah Mehmood Qureshi on Monday, while addressing a session of the National Assembly (NA), strongly responded to “anti-CPEC forces” by stating that the entire house had achieved consensus on the China-Pakistan Economic Corridor (CPEC).

He vowed to complete the project [no matter what] comes to hinder it.

Qureshi also outlined importance of the CPEC, and said that the project would unfold [trade] routes towards central Asia.

Earlier on Sunday, regarding the recent attack on a five-star hotel in Gwadar and other terrorism incidents, Qureshi had maintained, “Anti-Pakistan and anti-CPEC forces are behind terrorism incidents. Some forces do not want stability in Pakis- tan and others don’t want to see the CPEC project moving forward.”

The foreign minister stated that those elements want anarchy in the state, while lauding efforts of Pakistan Army for responding spontaneously and completing the operation successfully at the Pearl Continental Hotel.

He maintained that no compromise would be made on the national interest of the country.

To resolve the issue of South Punjab, he suggested Pakistan Peoples Party (PPP) to hold talks with other political parties.