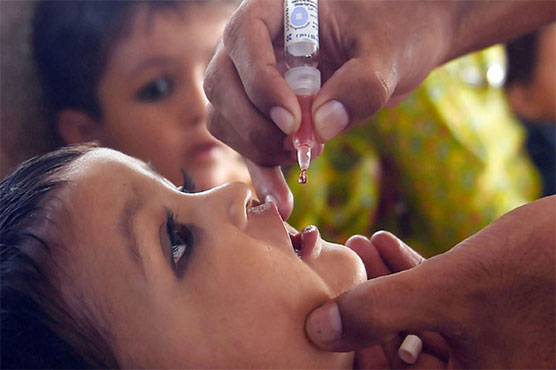 Polio virus has been confirmed in a three-year-old girl in North Waziristan.

ISLAMABAD (Dunya News) – A new polio case surfaced in tribal district of North Waziristan in Khyber Pakhtunkhwa ptovince, raising the tally of polio cases to 13 across the country in the current year, Dunya News reported on Wednesday.

According to Emergency Operation Centre, polio virus has been confirmed in a three-year-old girl in North Waziristan.

Polio is a highly infectious disease that invades the nervous system and can cause irreversible paralysis in a matter of hours. It is now endemic in only two countries, Pakistan and Afghanistan.

A $5.5 billion global eradication plan was launched last year with the aim of vaccinating 250 million children multiple times each year to stop the virus finding new footholds, and stepping up surveillance in more than 70 countries.

Pakistan’s polio cases are declining, with just 54 cases of polio virus were reported last year, down more than 80 percent from 2014, when the country suffered a large spike in cases.

Efforts to eliminate polio in Pakistan have became complicated in recent years, as polio workers have faced attacks by militants who say the health teams are Western spies, or that the vaccines they administer are intended to sterilise children.