Saudi Crown Prince in Pakistan: Everything you need to know 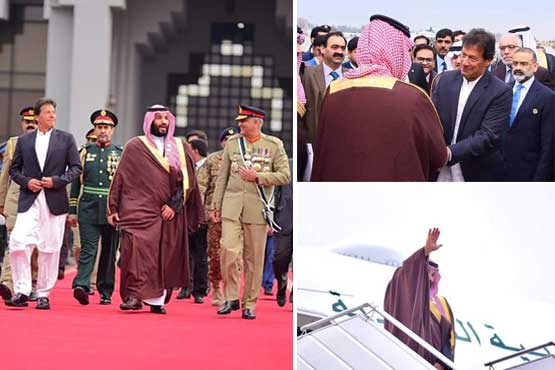 Saudi Crown Prince in Pakistan: Everything you need to know

The visit laid the foundation for a new chapter in Pakistan-Saudi relationship, marked by high level institutional framework to guide future direction of political, diplomatic, economic, investment, trade, people-to-people, defence, security and cultural aspects. The establishment of Supreme Coordination Council, its subsidiary mechanism and the Council’s inaugural session in Islamabad were one of the key steps in shaping the new trajectory in the bilateral relationship.

Investment and trade relations received high priority during the visit as demonstrated by the Saudi announcement of investments US $ 20 billion. The two sides signed a range of Agreements and MoUs in several areas.

The Prime Minister expressed gratitude to the Crown Prince for his immediate consent to release 2107 prisoners from Saudi jails.

A joint statement issued by Pakistan and Saudi Arabia, while reaffirming the historic relationship between the two brotherly countries, applauded the growing momentum in bilateral ties in all areas. The Saudi side praised Prime Minister Imran Khan’s dialogue offer to India including the initiative on opening of Kartarpur corridor.

Both sides stressed that dialogue is the only way to ensure peace and stability in the region and to resolve the outstanding issues. Both sides strongly condemned the atrocities and human rights violations committed against Muslims around the world.

The Prime Minister briefed the Crown Prince on the grave human rights violations in IOK and the need for resolution of Jammu and Kashmir dispute in accordance with UN Security Council resolutions and wishes of the Kashmiri people.

The joint statement also articulated the common positions of the two countries on a range of regional peace and security and international issues including inter alia challenges faced by the Islamic Ummah, interfaith harmony, counter terrorism, among others.

MBS was warmly embraced by Pakistani Prime Minister Imran Khan and Chief of Army Staff (COAS) General Qamar Javed Bajwa as he stepped onto a red carpet flanked by an honour guard at a military airbase near Islamabad. 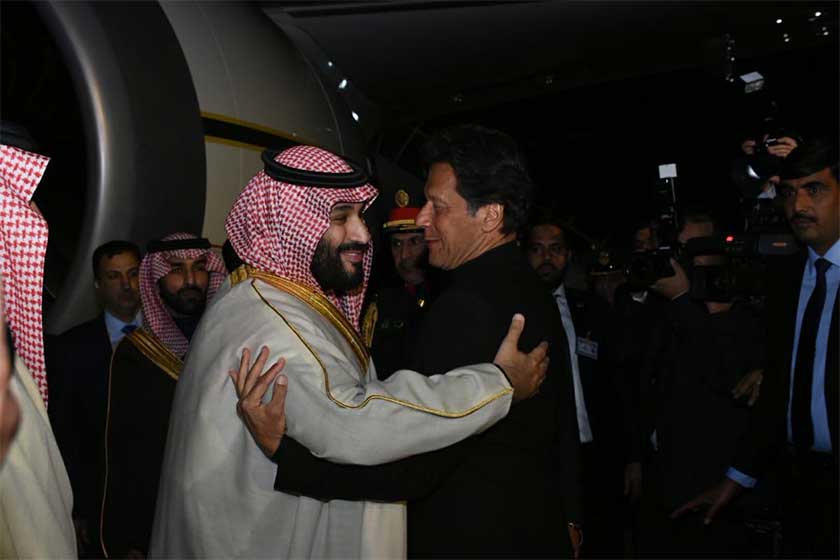 Mohammad bin Salman was greeted with a booming 21-gun salute as he arrived in Pakistan on Sunday evening. 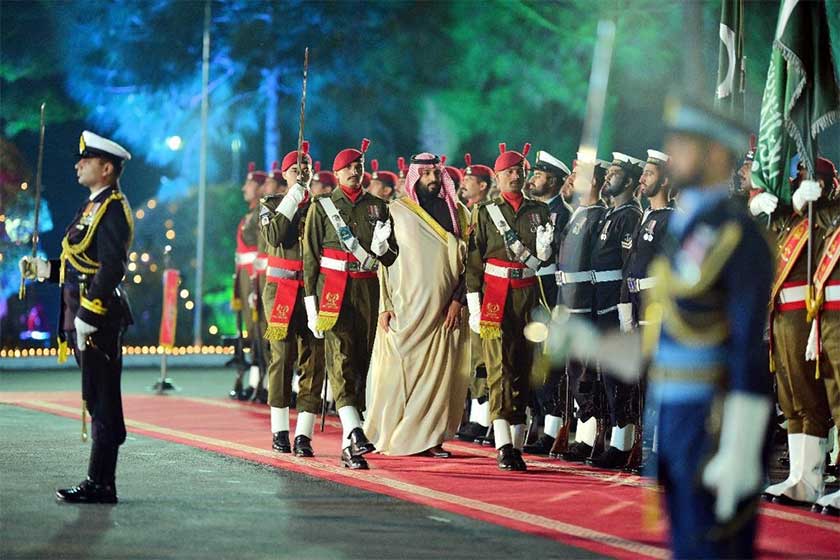 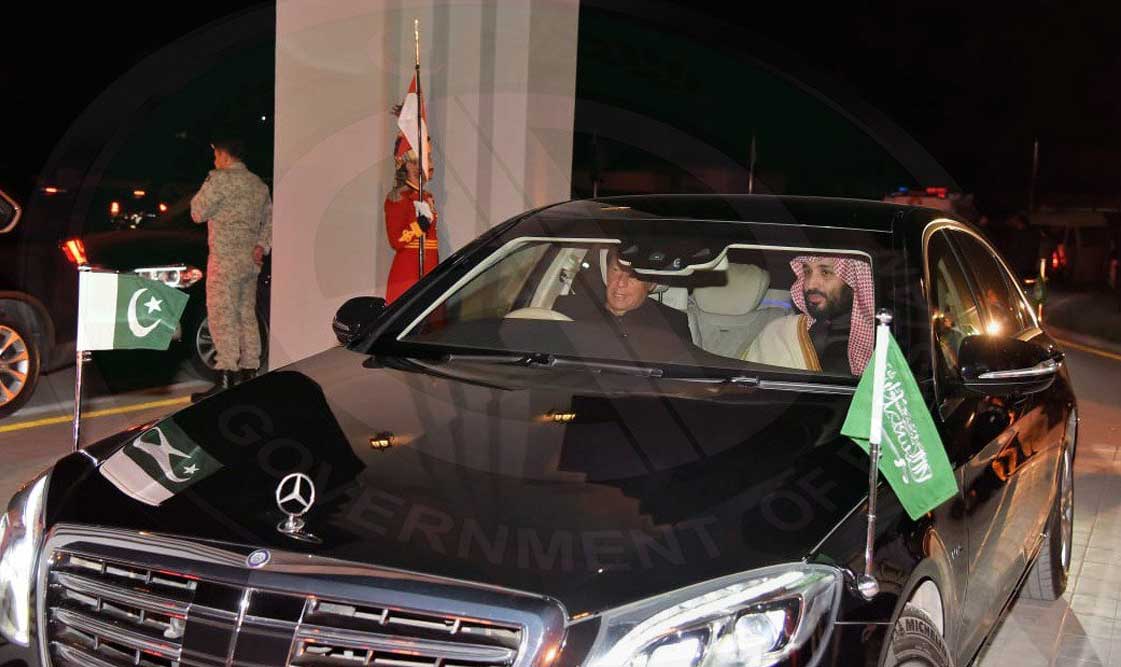 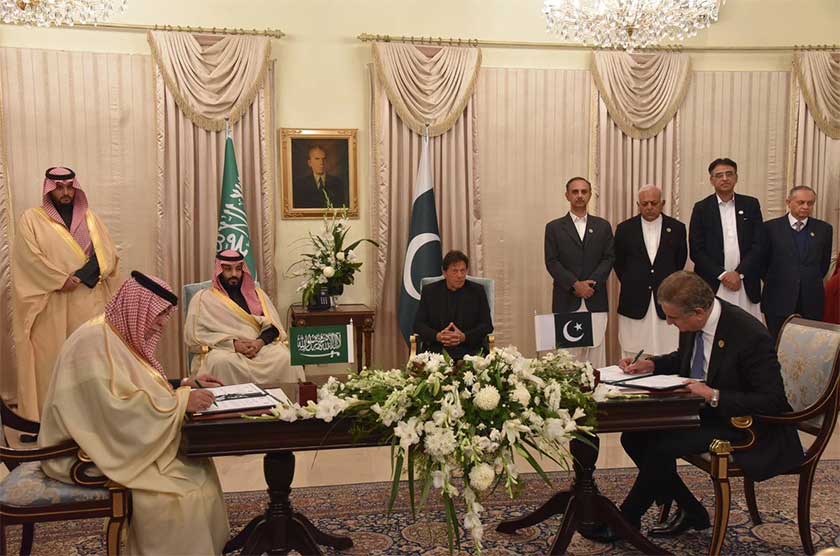 The agreements cover areas such as Standard Specifications, Mineral Resources, Investment in Refining and Petro Chemical Sectors, power generation, development of renewable energy projects, and cooperation in the Field of Youth and Sports. 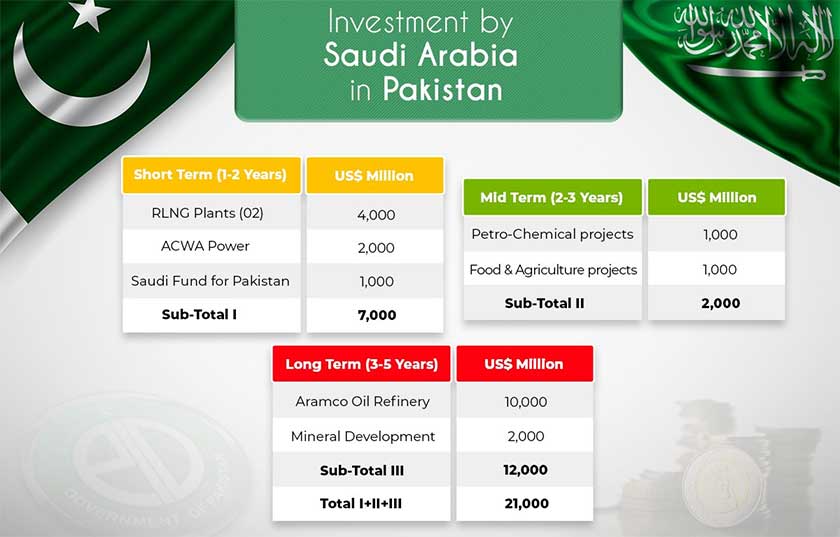 The documents were signed by the Ministers of Foreign Affairs, Finance, Power Division, Inter Provincial Coordination, and Petroleum Division.

These agreements will lay the foundation for enhanced economic cooperation between Pakistan and the Kingdom of Saudi Arabia.

At the dinner hosted for MBS, Prime Minister Imran Khan requested the Saudi authorities to look into the hardships of the Pakistani labourers working in the kingdom.

“There are some 3,000 Pakistani prisoners there and we just would like you to bear in mind that they are poor people who have left their families behind,” Imran Khan said.

Terming it a “special request”, the premier asked Mohammed bin Salman to “look upon them (Pakistani labourers) as your own people”. 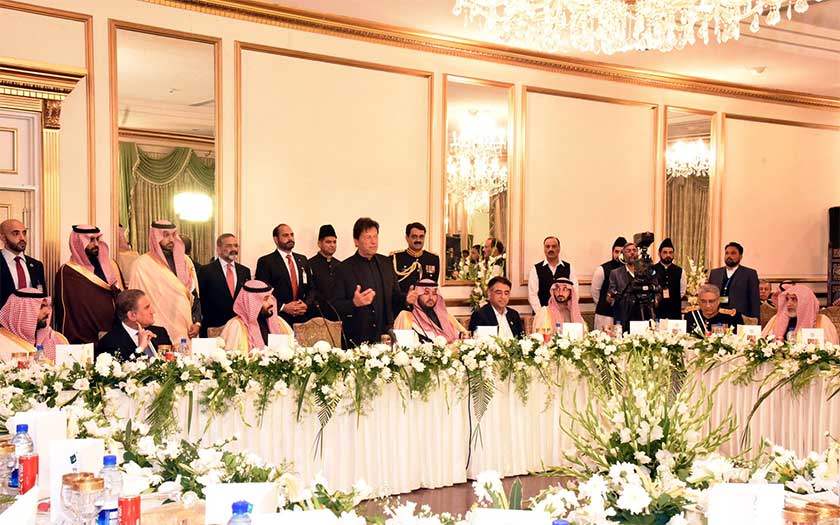 In response, the crown prince told Imran Khan he could consider him the ambassador of Pakistan in Saudi Arabia.

“We cannot say no to Pakistan ... whatever we can do, we will deliver that,” he assured. 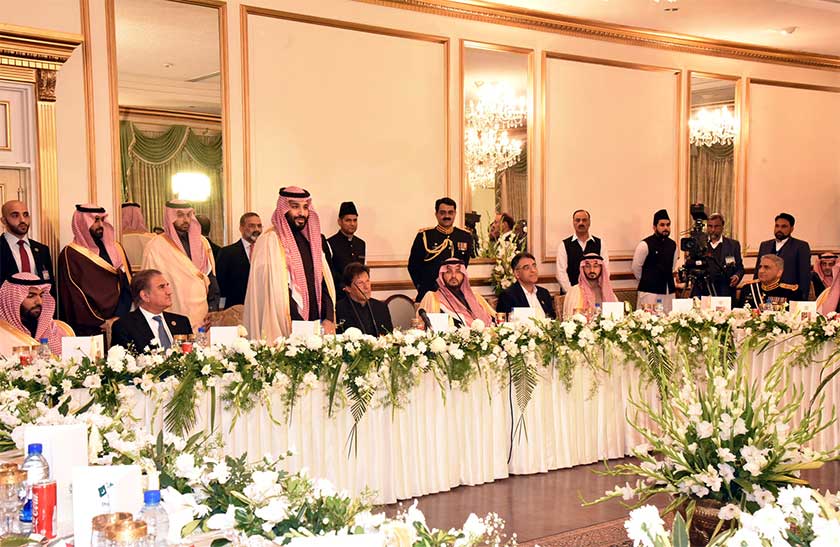 Mohammed bin Salman in his speech said Pakistan was a “dear country” to all Saudis and “we have walked together in tough and good times”. He said Pakistan today was facing a great future “with a great leadership”, noting that the country’s GDP grew by 5 per cent in 2018.

“We believe that Pakistan is going to be a very, very important country in the coming future and we want to be sure we are part of that,” the crown prince said.

A special contingent of Presidential security guards escorted the chariot. 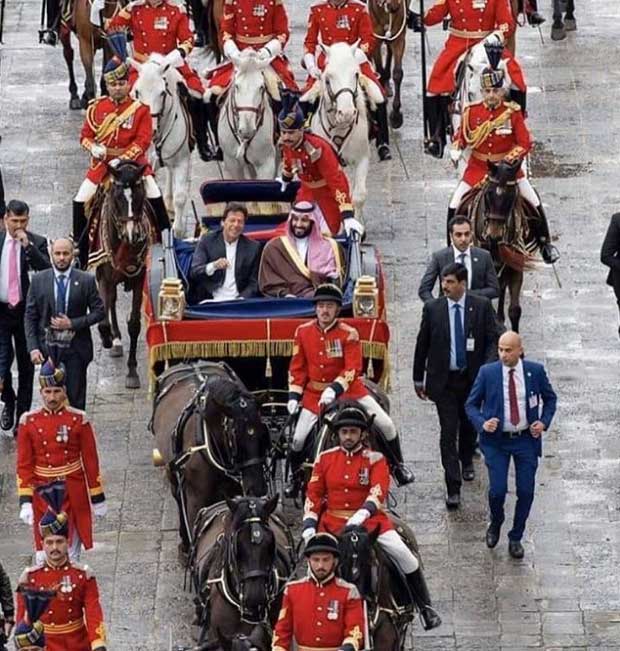 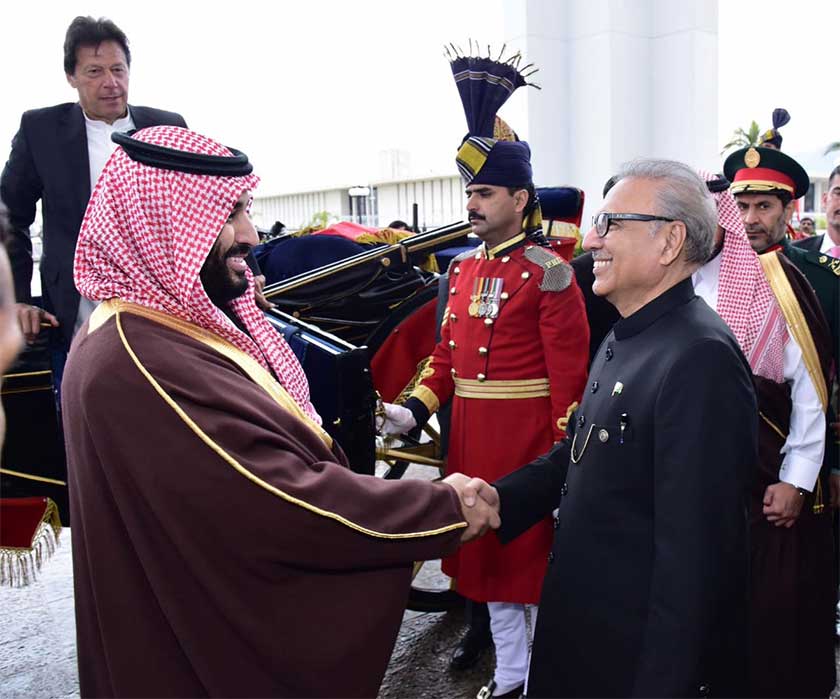 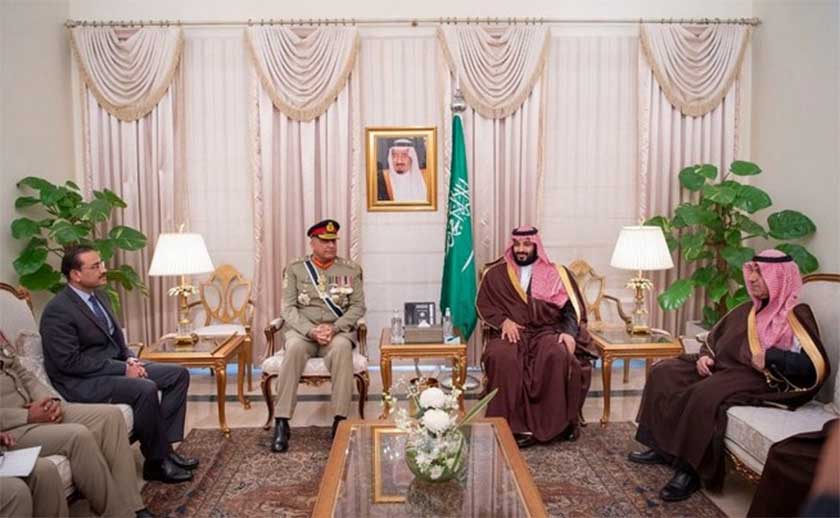 During the meeting, they discussed the ongoing defense cooperation between the two countries, and the opportunities to strengthen it, in addition to discussing developments in the region. 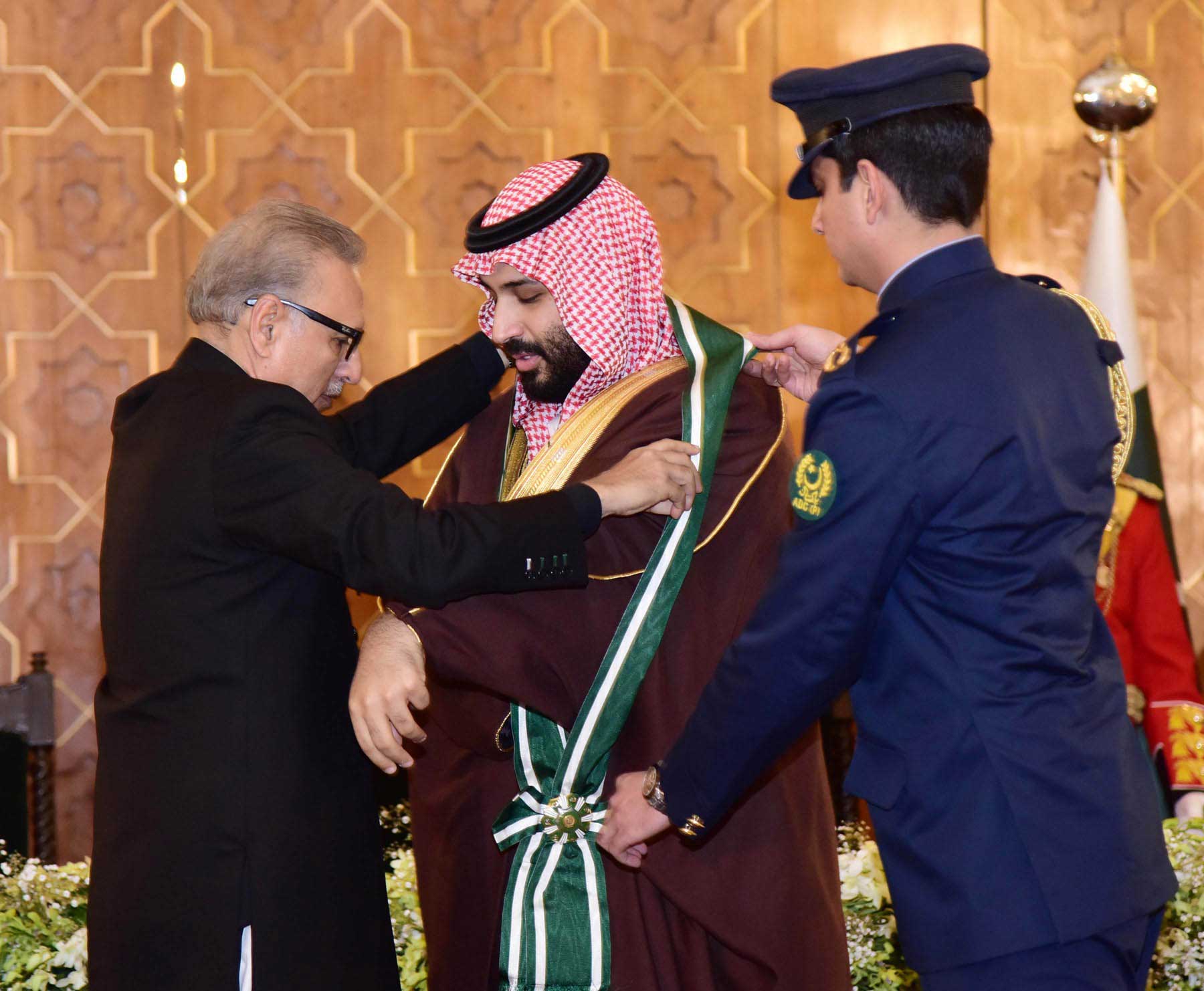 While addressing the event, President Dr Arif Alvi said Pakistan and Saudi Arabia have similar directions for peace in the region, developing, and elimination of corruption.

He said it is a very golden era for Pakistan as it is open for investment.

The President said we bravely fought terrorism and we are now standing at an era, where there will be increasing prosperity and peace in Pakistan, Saudi Arabia, and the region.

He thanked the Crown Prince for signing various Memorandums of Understanding for huge investment in Pakistan. He said it is the first phase of Saudi investments and the second phase will take place soon.

The prime minister, leaving aside the protocol, himself drove the Saudi Crown Prince to the air base as sign of warmth and affection between leadership of the two brotherly countries. 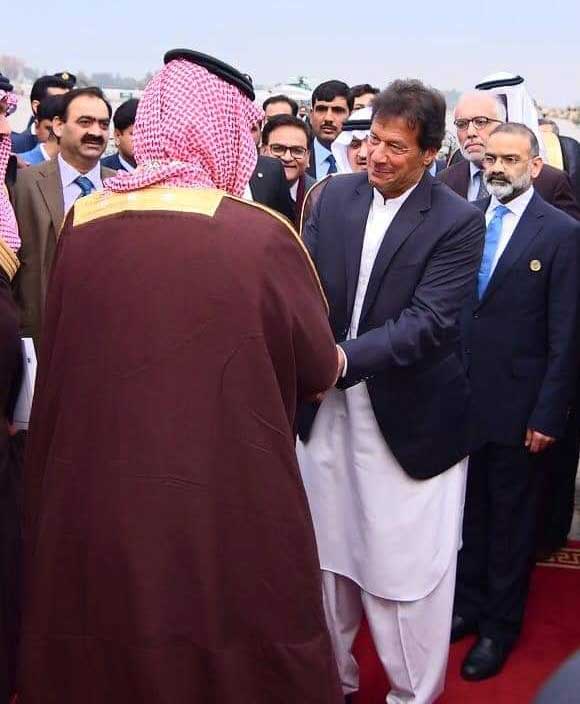 Chief of Army Staff General Qamar Javed Bajwa, cabinet members, Saudi Ambassador to Pakistan Nawaf bin Said Al-Malki, top military and civilian authorities were present at the air base to see off the royal dignitary and his delegation. 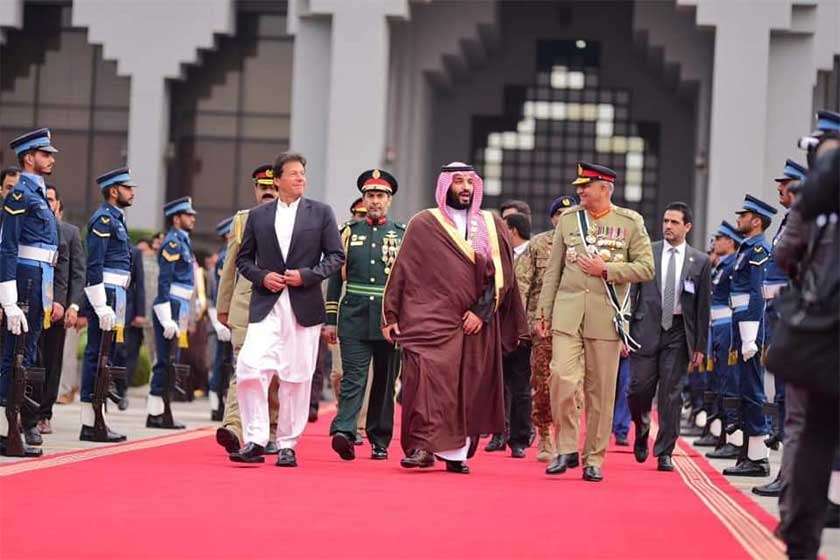 At the end of the visit, His Royal Highness the Crown Prince, Deputy Prime Minister and Minister of Defense expressed his thanks to the Prime Minister of Pakistan Imran Khan for his warmhospitality and brotherly feelings which are not unusual for Pakistan and the Pakistanis.

For his part, the Prime Minister expressed his best wishes to the health and wellness of the Custodian of the Two Holy Mosques King Salman Bin Abdul Aziz, hoping to visit Pakistan in the near future.