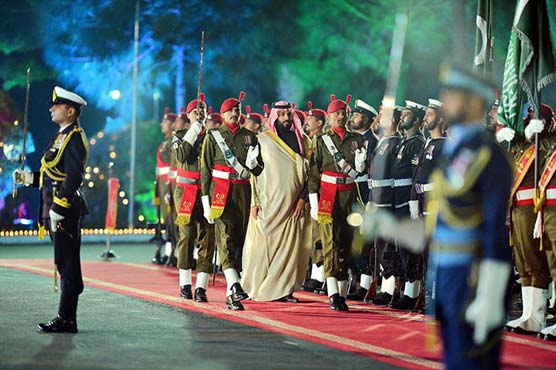 Upon entry into Pakistan's airspace, Mohammad bin Salman airplane was given a warm welcome.

The Saudi Crown Prince was driven to PM House by Prime Minister Imran Khan himself where awaits a grand welcome line of celebrations.

The Saudi Crown Prince was also given a twenty one gun salute at the Nur Khan Airbase.

Upon entry into Pakistan s airspace, Mohammad bin Salman airplane was given a warm welcome.

F-16 and JF-17 Thunder jets of Pakistan Airforce took the plane of visiting dignitary into protective custody and escorted it to its destination.

Mohammad Bin Salman is accompanied by a high-powered delegation, including members of Saudi Royal family, key ministers and leading businessmen. The visit marks a deepening in ties between allies and in return Pakistan s powerful army lending support to Saudi Arabia and its royal family.

He was warmly received by Foreign Minister Shah Mehmood Qureshi.

On his first-ever visit to Pakistan as the crown prince of Saudi Arabia, Mohammad bin Salman (MBS) will be accorded a red carpet welcome and a guard of honour at the Prime Minister (PM) House in Islamabad after his arrival at Noor Khan Air Base in Rawalpindi.

He will be presented a 21-gun salute by a contingent of the armed forces amid much fanfare in the capital.

The crown prince will be received by PM Imran Khan and other members of his cabinet at the air base.

He will hold key one-on-one meetings with PM Imran Khan, President Arif Alvi and Chief of the Army Staff General Qamar Javed Bajwa as both countries seek to capitalise on the fresh momentum in ties due to a flurry of recent contacts at the leadership level.

Besides, a troupe of folk musicians and cultural dancers are also expected to stage a small show to receive him.

The national anthems of both countries will be played, and Mohammad bin Salman will be given a fly-past by a formation of JF-17 fighter jets.

He is scheduled to stay in the country for two days.

Strict security measures have been formulated and implemented across the federal capital and Rawalpindi.

The army, Rangers and police will together be handling security on Sunday and Monday.

Police have set up pickets at all the entry and exit points of the city and check posts have been set up on main roads. The Red Zone will be completely sealed and a separate traffic plan has been issued for the joint cities.

Meanwhile, a public holiday has been declared on Monday in light of his visit.

Around $21 billion Memorandums of Understanding (MoUs) are likely to be inked during his two-day stay.

Islamabad has termed his visit a “historical one” which is expected to stabilise the crippling economy of the country.

Matters pertaining to trade and investment in various sectors including energy will be discussed in the meetings.

Pakistani officials have already flagged up that Saudi Arabia will announce seven investment agreements related to energy, tourism, minerals, petrochemicals, hotel industry events, and a $10 billion oil refinery and petrochemicals complex in the coastal city of Gwadar, where China is building a port.

MoUs of five hydropower projects worth SR1.207 billion are expected to be signed during the visit of Saudi crown prince.

MBS visited Pakistan in 2016 before he was elevated to crown prince.