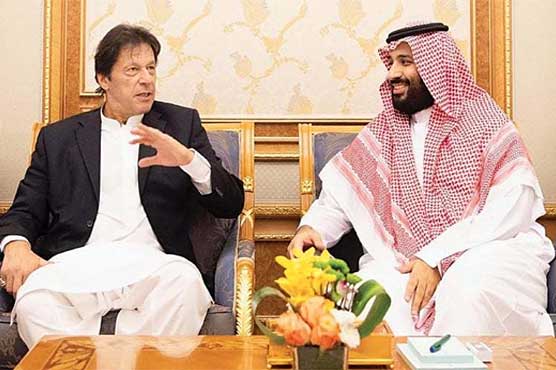 “At the invitation of the Prime Minister of Pakistan, the Crown Prince of the Kingdom of Saudi Arabia, His Royal Highness, Muhammad bin Salman will visit Pakistan on 16-17 February 2019. His Royal Highness holds important portfolios in the Kingdom’s government, including that of the Vice President of the Council of Ministers and the Defense Minister,” the Foreign Office stated in a press release.

This will be first state-level visit of His Royal Highness to Pakistan since his elevation to the position of the Crown Prince in April 2017.

The Saudi Ministers accompanying the Crown Prince will meet their counterparts to discuss bilateral cooperation in their respective fields. On the sidelines of the visit, businessmen of the two countries will also meet to discuss opportunities of collaboration in the private sector.

During his stay, Pakistan and Saudi Arabia will be signing a number of agreements and MoUs related to diverse sectors, including investment, finance, power, renewable energy, internal security, media, culture and sports. The two countries will also discuss ways and means to develop a robust follow-up mechanism to ensure effective implementation and quick progress on tangible areas of cooperation.

“The visit of His Royal Highness Crown Prince Muhammad bin Salman is expected to significantly enhance bilateral ties between the two countries in all spheres of cooperation,” the FO spokesperson stated.

Strict security arrangements have been finalized ahead of arrival of Saudi Arabia’s Crown Prince Mohammed bin Salman in Islamabad.

As per plan, mobile phone service will remain suspended in parts of Islamabad and Rawalpindi while more than 100 check points will be established on different routes.

During the stay of the Prince, training flights will be suspended whereas flying drones will also be prohibited.

Teams of security, media and doctors of Mohammed bin Salman have already reached Islamabad. Besides this, five trucks full of Saudi Crown Prince’s personal amenities also arrived in Islamabad that include his exercise equipment, furniture and other personal belongings.

Mohammed bin Salman will likely stay at the Prime Minister House, however; two of the top hotels in Islamabad have been booked fully for members of his staff while two others have been partially booked.

Mohammed bin Salman’s visit to Pakistan is likely to bring $20 billion investment in the country.

According to sources, deals with Saudi Arabia have been finalized to get oil on loan. Saudi Arabia will provide oil worth $3 billion to Pakistan for three years. Furthermore, meetings will be held with Mohammed bin Salman to hand over two power plants based on Liquefied Natural Gas (LNG) to Saudi Arabia, with an expected investment of $2 billion. Saudi Arabia is also interested to invest $6 billion in Gwadar oil refinery.

The refinery and oil complex in the strategic Gwadar Port on the Arabian Sea is the ultimate destination for the massive multi-billion dollar China Pakistan Economic Corridor, which lies not far from the Indo-Iranian port of Chabahar.