Probe reveals use of IED in blast in Karachi: BDS officials 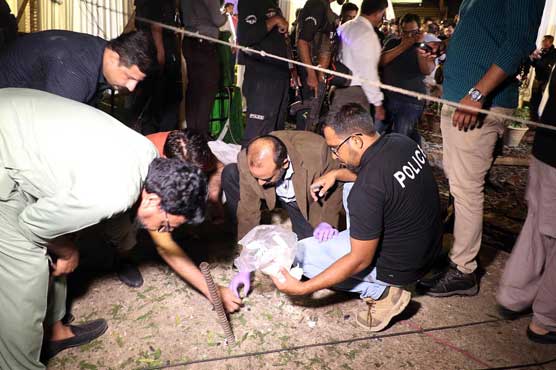 Probe reveals use of IED in blast in Karachi: BDS officials

Around 250 to 300 grams of explosive material was used in the device.

The BDS officials visited the bomb site and revealed that the a low intensity improvise explosive device (IED) was exploded in the ‘Mehfil-e-Milad’ event.

Around 250 to 300 grams of explosive material was used in the device.

Talking to media during his visit, Syed Kaleem Imam said that such incidents aimed to disturb Karachi’s law and order situation.

Saturday night s blast took place as hundreds of supporters of a faction of the MQM-P were present in the neighborhood of Gulshan-e-Johar for ‘Mehfil-e-Milad’ event. The explosion left several people injured.

The attack happened a day before Pakistani Prime Minister Imran Khan is expected to visit Karachi, the capital of southern Sindh province.

Earlier, the initial reports revealed that a cracker made up of 300 grams of explosives material, was used in the blast occurred at Muttahida Qaumi Movement-Pakistan’s (MQM-P) ‘Mehfil-e-Milad’ event held near Gulistan-e-Johar in Karachi.

Senior Superintendent Police (SSP) East Capt (r) Ghulam Azfar Mahessar informed that it was a cracker attack and parts of the cracker have been collected from the crime scene by the bomb disposal unit. However, the programme was organised without permission of the police, he added.

On the other hand, MQM-P leader Faisal Sabzwari responded saying that SSP has given very irresponsible remarks.

It is pertinent here to mention that at least six people were injured in a blast at MQM-P ‘Mehfil-e-Milad’ event held near Gulistan-e-Johar in Karachi, late Saturday.