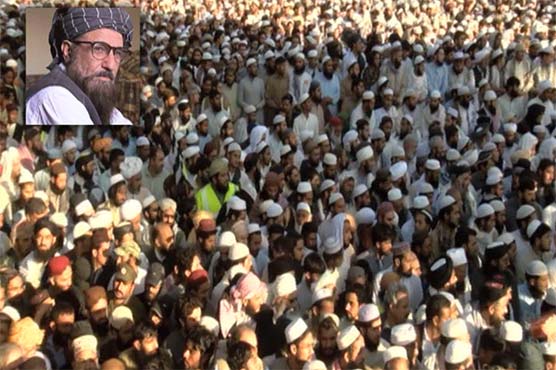 Envoys of Afghanistan, Saudi Arabia and Qatar will also attend the funeral prayer.

AKORA KHATTAK/RAWALPINDI (Dunya News) – Religious scholar and Jamiat Ulema Islam-Sami (JUI-S) chief Maulana Samiul Haq on Saturday was laid to rest at the Darul Uloom Haqqania next to this father.

As per details garnered, foolproof security arrangements were made to avoid any untoward situation. The town administration has summoned additional contingents of security forces in this regard.

The investigation team has prepared the initial report on the assassination of Maulana Samiul Haq and forwarded it to the concerned authorities. Police have arrested Sami’s security guard and secretary and investigation from both is underway. Police has also collected finger prints and other evidence.

On the other hand, the case of Maulana Samiul Haq’s murder has been lodged against unknown attackers in Airport Police Station, Rawalpindi. The first investigation report (FIR) states that deceased was attacked at 6:45PM. It further reads that Maulana was stabbed 12 times in stomach, chest, forehead and ears.

Hamidul Haq—son of deceased leader—has refused to carry out autopsy while terming it against Sharia.

He was shifted to local hospital for medical assistance where he succumbed to his wounds.

"He was resting in his room during Asr time when his driver/guard went out for 15 minutes. When he returned, he found Maulana Samiul

Haq dead in his bed and his body covered in blood," Sami s son said.