Nation supported PML-N in by-polls despite all conspiracies: Nawaz Sharif 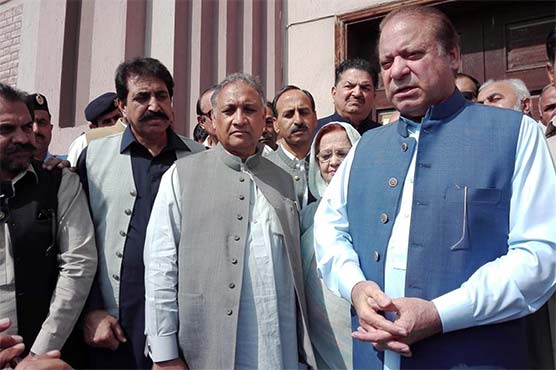 Nation supported PML-N in by-polls despite all conspiracies: Nawaz Sharif

Inflation has increased in the first 50 days of the incumbent government, said Nawaz.

ISLAMABAD (Dunya News) – Former Prime Minister Nawaz Sharif on Monday has thanked the nation for supporting Pakistan Muslim League-Nawaz (PML-N) in by-election despite all the conspiracies.

Talking to media outside the accountability court, Nawaz Sharif said that PML-N has won Pakistan Tehreek-e-Insaf‘s (PTI) seats. By-election results are indicative of the time to come, he predicted.

He said that PTI has failed to run the country in a smooth way, adding inflation has increased in the first 50 days of the incumbent government. During the PML-N tenure, dollar did not surpass Rs104 but now, everyone can witness where its rate has touched in the last 50 days, he stated.

The ex-PM went on to say that PML-N is facing worst kind of political revenge. As a prime minister, I always served the people with honesty and hardworking, he said.

Overseas Pakistanis voted for the first time in the by-polls. The commission said that as many as 7,364 eligible I-voters received their voters’ passes to participate in the polling.