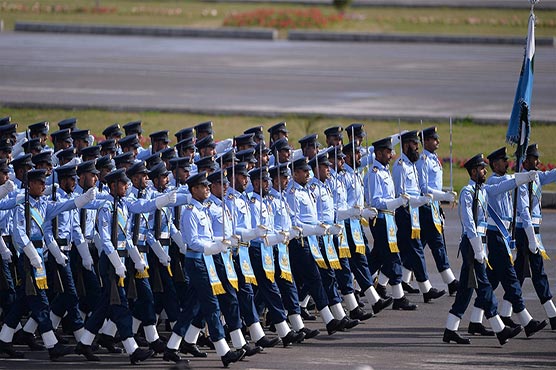 ISLAMABAD (Dunya News) - Air Force Day is being observed today (Wednesday) with traditional zeal and dignity across the country to commemorate the heroics of Pakistan Air Force (PAF) in the war of 1965 against India.

Pakistan Air Force celebrates September 7 as the PAF Day in commemoration of the PAF’s role in defending the country and remembering its martyrs of the 1965 war.

Special ceremonies are being held at all bases of PAF to pay homage to the martyrs who laid their lives while protecting the country from enemy.

The day started with special prayers and Quran Khawani for the martyrs of 1965 and 1971 wars and those who sacrificed their lives in action since creation of Pakistan.

Floral wreaths would be laid on the graves of PAF Shuhada throughout the country. Air shows and other programmes will mark the Pakistan Air Force’s role in defending the nation in the Indo-Pakistani War of 1965.

A notable event of the war was that PAF’s flying ace Muhammad Mahmood Alam shot down five planes of Indian Air Force in less than a minute.

Yesterday, the nation observed Defence Day to pay homage to martyrs of 1965 and 1971 wars with India.