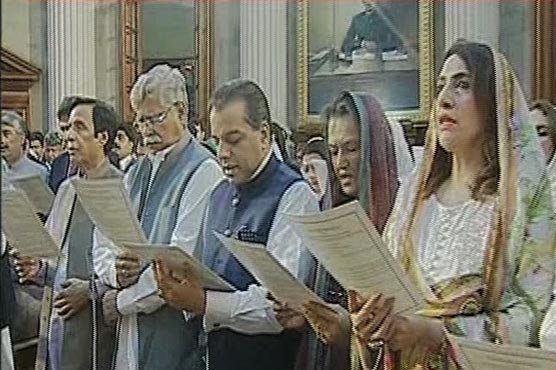 Speaker and Deputy Speaker of the Assembly will be chosen on August 16.

LAHORE (Dunya News) – At least 358 newly-elected members of 17th Punjab Assembly were administered oath on Wednesday by outgoing speaker Rana Muhammad Iqbal during the first session that begun after a delay of 46 minutes.

Interim Chief Minister of Punjab Dr Hassan Askari and his cabinet are attending the session and will welcome the new members.

Speaker and Deputy Speaker of the Assembly will be chosen on August 16 through secret balloting. The nomination papers for the aforementioned slots will be submitted from 3pm to 5pm today.

PTI has nominated Chaudhry Pervez Elahi as speaker and Dost Muhammad Mazari as deputy speaker. On the contrary, Chaudhry Iqbal Gujjar will run for speaker’s slot.

PTI has 175 members in the assembly, PML-Q 10, PML-N 162 and PPP10. Rah-e-Haq party has one member while three independent members are present.

Election results from three constituencies are pending while it has been halted from other three. Seven seats of Punjab Assembly were vacated after the member chose to take oath from National Assembly seat.

Strict security arrangements have been made on the occasion. Help desk have been formed on the entrance gate.