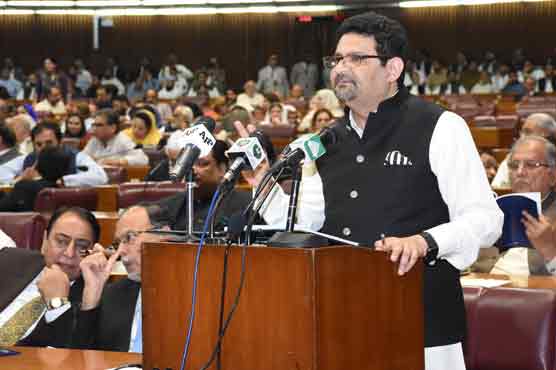 It is for the first time that an elected government has presented the federal budget for the sixth time.

The total budgeted government of Rs 5.246 trillion was announced, with the tax revenue and FBR revenue targets set at Rs 4.88 trillion and Rs 4.435 trillion.

Miftah Ismail said despite many difficulties and challenges, the government achieved economic stability over the last five years and took the growth rate to the record level.

Highlighting the economic performance of incumbent government, the Finance Minister said GDP ratio remained five point eight percent during the current fiscal year which is the highest in the last thirteen years.

He said volume of economy over the last five years has increased to thirty four thousand, three hundred and ninety six billion rupees.

Finance Minister said per capita income has increased to over one hundred and eighty thousand rupees. Today, the country has become the twenty fourth biggest economy.

The finance minister announced ten percent ad hoc relief allowance for civil and armed forces employees and ten percent increase in pensions across the board. House rent ceiling and house rent allowance was also increased by 50 percent each.

Minimum pension was increased from the existing Rs 6,000 to Rs 10,000 considering the difficulties of low paid pensioners.

Similarly, family pension would also get increase from Rs 4,500 to Rs 7,500. Minimum pension of pensioners above seventy five years of age would be Rs 15,000.

The government has also proposed an allocation of Rs 12 billion for provision of advances to government servants for house building and purchase of transport facility. It has also set aside Rs 5 billion for senior officers’ performance allowance, details of which would be announced separately.

Defence budget was proposed at Rs 1,100 billion against the revised budget of Rs 999 billion in the outgoing year.

The government has allocated Rs 46,680 million under Public Sector Development Programme (PSDP) for the ongoing and new schemes of the Higher Education Commission (HEC) during fiscal years 2018-19.

“We are introducing a new programme to be called 100 100 100. This is a federal government’s commitment to ensure that 100% Pakistani children will be enrolled in schools, 100% children will be retained in schools and finally, 100% will graduate from schools. This is a solemn commitment of not just of Prime Minister Shahid Khakaan Abbasi but the entire parliament to the children of Pakistan,” said the finance minister in his speech.

The federal government set aside Rs 13.9 billion for health sector

Finance Minister said budgetary allocations for Benazir Income Support Program for the next financial year had been increased to Rs 124.7 billion rupees against Rs 121 billion rupees in the outgoing year.

Rs 90 billion for rehabilitation of IDPS

The government announced to allocate a sum of Rs 90 billion for rehabilitation of internally displaced persons (IDPs).