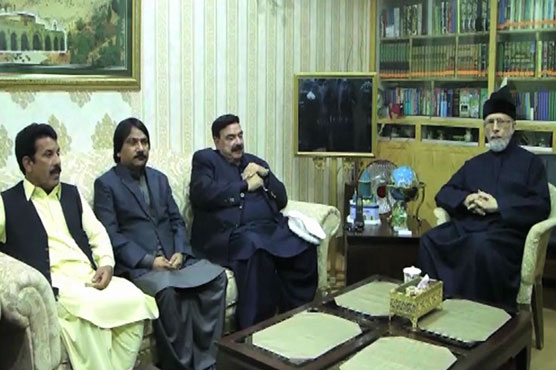 During the meeting, PAT leader took Sheikh Rasheed into confidence over Justice Baqir Najafi’s report on the Model Town incident. AML chief while expressing solidarity with Tahirul Qadri announced full support to his party in the matter.

Talking to media after the meeting, Sheikh Rasheed said that Sharif family’s politics will end forever as everyone will be evicted from government before March 30. He maaitained that all tha parties are united over minus Nawaz Sharif.

Both the leaders reiterated demand for the resignations of Punjab Chief Minister Shahbaz Sharif and provincial Law Minister Rana Sanaullah.

All the opposition parties have voiced their support for Dr Tahirul Qadri to give tough time to the Pakistan Muslim League-Nawaz (PML-N) government following the release of Justice Baqir Najafi’s report that pointed fingers at Punjab Law Minister Rana Sanaullah and provincial police.

Putting forward three demands, the PAT chief has insisted on the resignations of Punjab CM and provincial Law Minister; asked the government to remove from active duty all police officials involved in the operation against PAT workers in 2014 and the meeting held before it till the court decided the case; and demanded the constitution of a joint investigation team (JIT) along the lines of the one formed to probe the Panama Papers case.