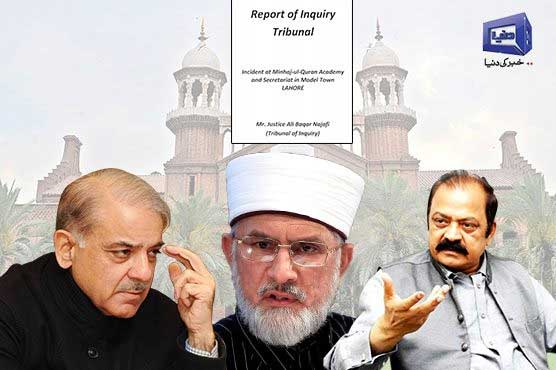 The report was compiled by Justice Ali Baqar Najafi commission after the incident was probed following killing of at least 14 persons and scores were left wounded on June 17, 2014 in a clash between police and workers of Pakistan Awami Tehreek (PAT) workers in Model Town of Lahore.

Punjab Police had moved to remove the barriers placed outside Dr Tahirul Qadri’s residence and Minhajul Quran International (MQI) Secretariat in Model Town. The workers of MQI resisted the move which led to a deadly clash.

The report made public today stated: "The participants were in knowledge of the orders passed by Lahore High Court (LHC) and no legal opinion from Advocate General Punjab was sought prior to the decision to start the operation."

"The then law minister, Rana Sanaaullah, had a strong point of view who decided not to allow Dr Qadri to take any opportunity to fulfill his objective," the report added.

Report of the commission further reads: "Admittedly such a level of offensive by police by any stretch did not commensurate with the level of resistance by unarmed PAT workers."

It should be noted here that the judge of the high court tasked to probe an issue concerning killing of 14 persons wrote in the inquiry report: "The reader of this report can easily fix the responsibility of the unfortunate Minhaj-ul-Quran incident."

Justice Baqar claimed: "It has become crystal clear that order of disengagment was not passed at all, rather position taken by C.M. Punjab appears to be an afterthought defense not taken before the nation in the press conference."

The inquiry report states: "The level of co-operation in digging out is that no police official from top to bottom, whether actively participated in the operation or not did, utter a single word about the person under whose command the police resorted to firing upon the PAT workers. Understandably, all were in unison in withholding the information from this Tribunal."

"Unfortunately, such are the facts and circumstances in which they continued to proceed," Justice Baqar wrote in the report.

The court dismissed three appeals filed by the Punjab government against the release and ordered to public the report of Justice Baqir Najafi Commission within 30 days.

Pakistan Awami Tehrik (PAT) had argued that the report should be made public because it is the right of people to know who killed their loved ones in the incident.

“The (Model Town incident) report only says probably the order of Shehbaz Sharif wasn’t forwarded,” the Punjab Law Minister said while speaking to a press conference in Lahore on Tuesday.

He said that the report bears shortcomings.

PAT chief had announced to lead a long march against alleged corrupt government on June 23, 2014.

Removal of barriers deemed encroachments resulted in deadly clash between the law enforcers and workers of the political front claiming 14 lives and leaving numerous injured.