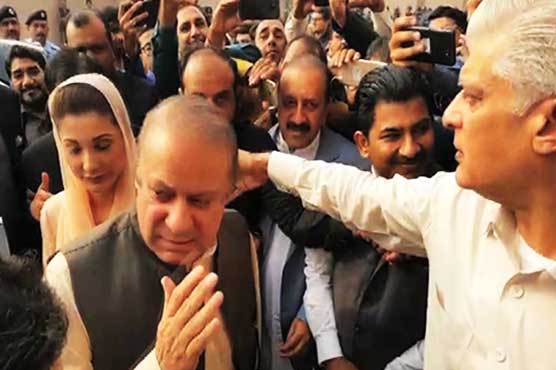 Hearing was suspended till Tuesday to wait for detailed IHC's verdict on merger of references plea.

ISLAMABAD (Dunya News) – The accountability court on Friday has adjourned hearing of National Accountability Bureau (NAB) references against ex-prime minister Nawaz Sharif and his family till Tuesday without any proceeding.

Nawaz Sharif with his daughter Maryam Nawaz and son-in-law Captain (r) Safdar left for Punjab House after their one hour appearance in the court. They also submitted two bonds worth Rs5 million in the court.

Meanwhile, allies of Sharif, who has served as prime minister twice and was toppled in a military coup in 1999, have called the proceedings a political vendetta.

Sharif returned home on Thursday. He had been in London with his wife who is undergoing cancer treatment.