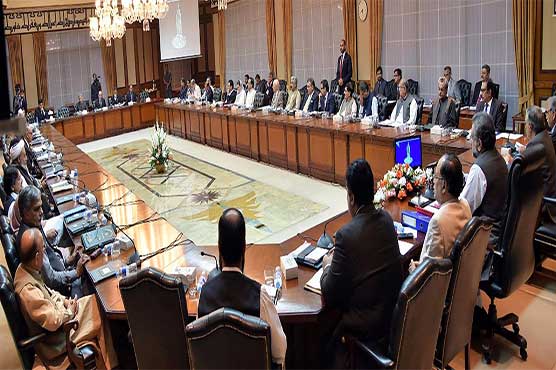 The cabinet chaired by Prime Minister Shahid Khaqan Abbasi on Wednesday strongly condemned the unprovoked firing by Indian security forces across the Line of Control (LoC), wounding innocent civilians including women and children.

The cabinet prayed for swift recovery of the injured, the PM Office media wing said in a press release. The cabinet offered Fateha for the martyrs of Kurram Agency IED blast and the martyrs of terrorist attack in Quetta.

It also expressed deep appreciation for finance minister Mohammad Ishaq Dar for his extraordinary role in achieving 10-year high growth rate of 5.3 per cent in the financial year 2017 which was endorsed and acknowledged by the World Bank in its recent statement.

It approved the proposal to notify Pakistan Mortgage Refinance Company Limited as Development Financial Institution under Section 3-A of the Banking Companies Ordinance 1962.

Ex-post facto approval of acceptance of Argentine award “Order of Mayo” by Imtiaz Ahmed, Additional Secretary, Foreign Affairs Division was also granted. Imtiaz Ahmed had received the award while serving as ambassador of the country in Argentine.

Signing of a memorandum of understanding (MoU) between TAFE Directors Australia and the Pakistan National Vocational and Technical Training Commission for encouraging cooperation in vocational and technical training to NAVTTC was also approved by the federal cabinet.

The meeting ratified various decisions of the Economic Coordination Committee (ECC) of the cabinet taken during its meeting held on 06-10-2017. The cabinet also approved appointment of six members of National Industrial Relations Commission.