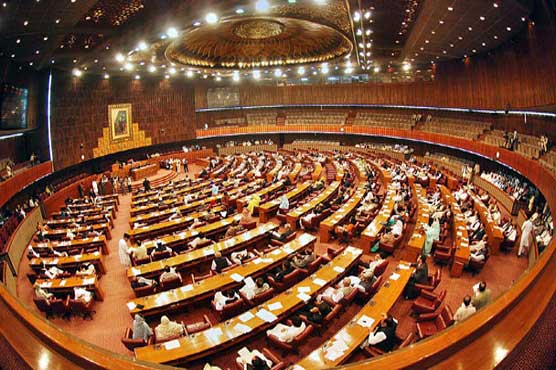 Opposition parties circled speaker's dais and protested against the bill

ISLAMABAD (Dunya News) – Electoral Reforms Bill 2017 has been approved in the National Assembly on Monday (October 2nd) whilst opposition members branded it a contradiction of Article 62 and Article 63 of the constitution.

However, law minister Zahid Hamid tabled the bill in the parliament and the opposition members tore copies of the bill and circled National Assembly Speaker Ayaz Sadiq s dais to record their protest.

Shah Mehmood Qureshi said that the clause that was proposed to be added in the bill contradicted with the Article 62 and Article 63 of the Constitution of Pakistan.

PTI vice chairman demanded exclusion of Section 203 in the draft.

Qureshi said that the provision, if the parliament goes ahead with approving it, would be challenged in the courts.

Members of the opposition chanted slogans and protested against the proceedings of the House.

Awami Muslim League chief Sheikh Rasheed addressed the lawmakers and said that the House was moving to risk democracy by mending the laws for a person.

He claimed that the government was going to  play with the dignity of the polls  in Pakistan.

AML leader said that Pakistan has never in the history bore satisfactory results of any clash.

Session of the assembly was previously to be convened on October 4th but it was rescheduled for October 2nd. According to the reports that surfaced earlier this week, the bill is to be forwarded to the state executive Mamnoon Hussain today.

Subsequently, a meeting of the Pakistan Muslim League-Nawaz on Tuesday (October 3rd) would re-elect Nawaz Sharif as the party president.

He is likely to leave for London the next day on Wednesday to his Myafair residence.

Only Imran Khan will be NA Opposition Leader: PTI's Naeem-ul-Haque