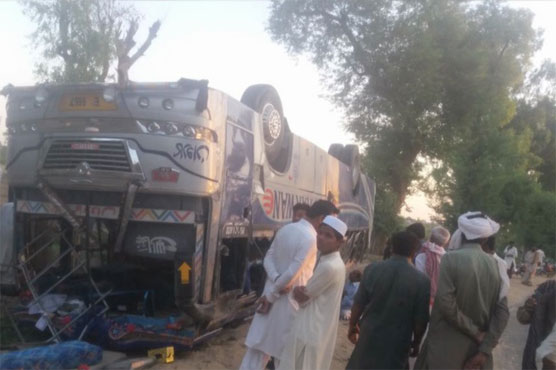 At least 16 people were wounded when a bus turned turtle in Mananwala near Sheikhupura on Friday.

SHEIKHUPURA (Dunya News) – At least 16 passengers sustained injuries when a bus overturned at the Sheikhupura Road in Mananwala area near Sheikhupura on Friday.

According to details, the ill-fated bus going to Faisalabad from Lahore turned turtle in Mananwala area near Sheikhupura when the driver tried to avoid collision with a rickshaw.

Rescue teams arrived at the scene and shifted the injured to Allied Hospital in Faisalabad where condition of two wounded parsons is stated to be critical.

Driver’s negligence, slack safety precautions, over-speeding and dilapidated roads are one of the main reasons of road accidents in the country whereas inexperienced drivers also flout the basic road safety rules.