Only Imran Khan will be NA Opposition Leader: PTI's Naeem-ul-Haque 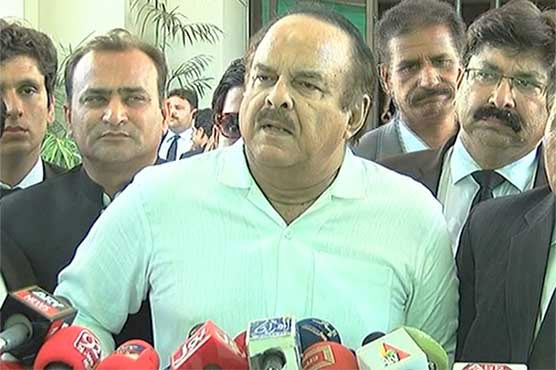 (Web Desk) – Pakistan Tehreek-e-Insaf (PTI) leader Naeem-ul-Haque has refuted to the earlier reports that Shah Mehmood Qureshi will contest as Opposition Leader, saying only PTI Chief Imran Khan will be the leader of the opposition in National Assembly.

Talking to media on Thursday, Haque claimed that the reports being spread in press are incorrect as no decision has been made in PTI meetings to nominate Qureshi as Opposition Leader. He maintained that there is a consensus that Imran Khan will take the position from Khurshid Shah after the alliance with MQM-P.

He further said, "Nawaz Sharif cannot escape justice and truth. His move to create rift between institutions will now fail." PML-N is trying hard to appoint current Intelligence Bureau DG as next chairman of National Accountability Bureau (NAB), he claimed.
On Twitter, he presented the point of view of his party by saying, "DG IB Aftab Sultan is too close to Nawaz to be considered for NAB Chairmans job. PTI is fully opposed to his appointment.No more nepotism."

DG IB Aftab Sultan is too close to Nawaz to be considered for NAB Chairmans job. PTI is fully opposed to his appointment.No more nepotism.

It was earlier reported that PTI s efforts to change leader of the opposition has created internal differences in the party as it has been divided into two groups. On one hand, Jahangir Tareen group has openly opposed the selection of Shah Mehmood Qureshi as the opposition leader, and demanded that party chairman should himself take up the responsibility. It was told that that PTI has not yet selected Shah Mehmood for the aforementioned designation.

On the other hand, party sources told PTI and MQM-P had earlier agreed to nominate Shah Mehmood Qureshi as the next opposition leader. To add insult to injury, several parties in the opposition, including Pakistan Muslim League-Quaid (PML-Q), Jamaat-i-Islami (JI), Qaumi Watan Party (QWP) and Awami National Party (ANP), have refused to side with PTI to remove PPP s Khurshid Shah as existing Opposition Leader.