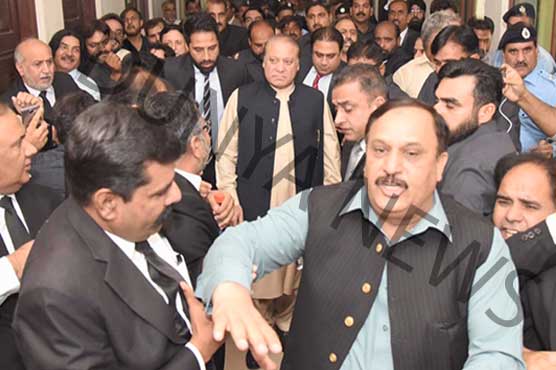 The warrants were issued after Sharif's short appearance in the court.

The warrants were issued after Nawaz Sharif was granted permission to leave to attend ailing wife, following his short appearance.

During the proceeding that was started after a 10-minute break, the accused were directed to submit surety bonds of Rs1 million each. The court also announced to indict ex-premier on October 2 in the cases pertaining to London flats and Azizia Steel Mills against the Sharif family.

The lawyer also asked the court to allow his client to skip personal appearance in the court as he needs to take care of his wife in London. The court refused by saying that he has to first appear on the day of indictment and the matter of exempting personal appearance will be deiced later on.

On the occasion, strict security arrangements were ensured by deploying police personnel inside and outside the court. Irrelevant people were also barred from entering the judicial complex.

On Monday, the disqualified premier had arrived in Islamabad from UK after a month visit for his wife Kulsoom Nawaz’s operation, who is undergoing cancer treatment. Maryam Nawaz and Captain Safdar are also expected to return soon while Hassan and Hussain Nawaz will stay in London.

Earlier, accountability court had summoned Nawaz Sharif and his sons Hassan and Hussain Nawaz on September 19 in Flagship Investments reference but they didn’t appear.

"It is hereby declared that having failed to disclose his un-withdrawn receivables constituting assets from Capital FZE Jebel Ali, UAE in his nomination papers filed for the General Elections held in 2013 in terms of Section 12(2)(f) of the Representation of the People Act, 1976 (ROPA), and having furnished a false declaration under solemn affirmation respondent No. 1 Mian Muhammad Nawaz Sharif is not honest in terms of Section 99(f) of ROPA and Article 62(1)(f) of the Constitution of the Islamic Republic of Pakistan, 1973 and therefore he is disqualified to be a Member of the Majlis-e-Shoora (Parliament).