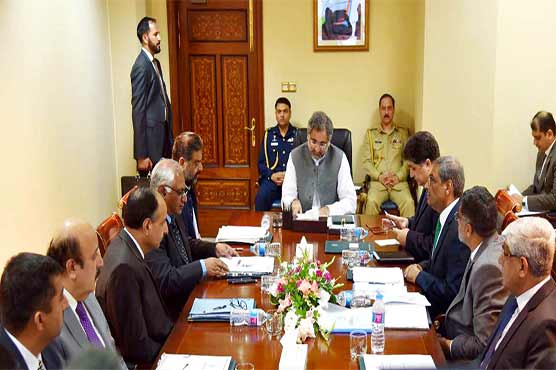 ISLAMABAD (APP): Prime Minister Shahid Khaqan Abbasi Tuesday directed the Ministry of National Food Security and Research to work on a policy framework for putting in place optimal methods for ensuring food security in the country.

The Prime Minister gave the direction during a briefing to him here at the PM Office by Minister for National Food Security and Research Sikandar Hayat Khan Bosan and senior officials regarding the overall outlook of agriculture sector, achievements of the ministry and challenges faced by the agriculture sector.

He was briefed that presently the agriculture sector was contributing 19.5% to the country’s gross domestic product (GDP) and around 42% labour force was employed in the sector.

Agriculture in the country provided 57.5% share in the total exports and growth rate of the sector remained 3.46% in FY 2016-17, he was briefed.

The Prime Minister stated that the government’s aim was sustainable growth of the agriculture sector as it was the mainstay of the national economy, a press release issued by the PM’s Media Office here said.

He also directed the ministry to bring the issue of current low investment in the sector as compared to the pre-devolution scenario before the Council of Common Interests (CCI) so as to ensure allocation of greater resources to the sector by provincial governments as well as the federal government.

The Prime Minister said proposals to increase productivity and crop diversification, keeping in view the local demands and meeting various other challenges including climate change, should also be part of the framework alongwith promotion of research and development functions of various organisations of the ministry in line with international best practices.

As a bottom line, the state must ensure a fair return to farmers for their efforts by adopting sustainable policy framework, he added. The Prime Minister said small farmers should be the focus of agriculture policy so as to provide maximum facilitation.

Three-day conference of Pakistani envoys to be held from today

PM briefed on current situation in Karachi after heavy rains