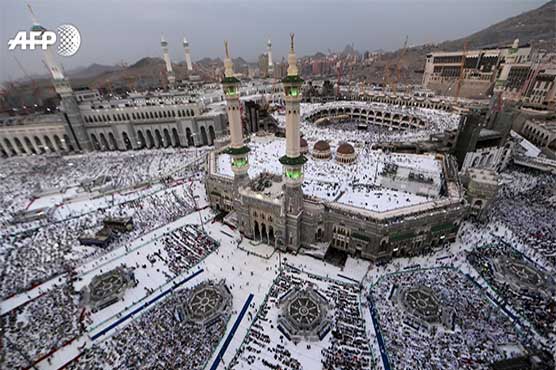 The pilgrims belong to all races, caste, linguistic backgrounds and nationalities.

ISLAMABAD (APP) - About 180,000 Pakistanis alongwith two million Muslims from across the world have converged on Makkah and started the rituals of Hajj on Wednesday.

According to official sources, Ministry of Religious Affairs of Pakistan had made comprehensive arrangements and was providing the facilities of transport, food and medicine to the Pakistani Hajis who came from all regions of Pakistan.

Custodian of the Two Holy Mosques King Salman bin Abdulaziz Al Saud was personally overseeing the arrangements.
Officials of Saudi Arabia’s Ministry of Hajj and Umrah had deputed more than 95,000 employees besides an equal number of volunteers to take care of Hajis through the service and guidance centers around the Grand Mosque.

The pilgrims belong to all races, caste, linguistic backgrounds, nationalities and nations of the world. They were praying in Haram Sharif (Grand Mosque) reciting verses of Holy Quran and seeking Allah’s mercy and His immense bounties.

According to officials of Pakistani ministry of Religious Affairs, the Pakistani pilgrims were satisfied with the Hajj arrangements.