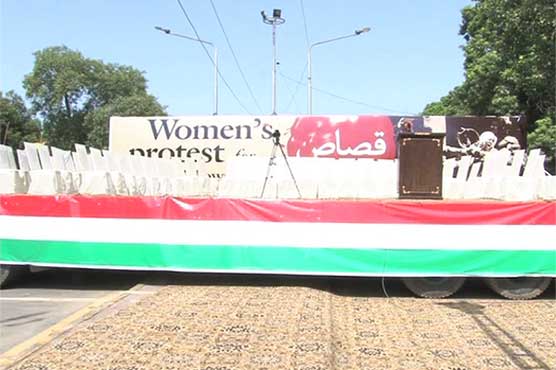 The sit-in will be held on DC Road on Thursday.

According to details, the protest will wind up after the address of PAT Chief Tahir-ul-Qadri at 10 pm whereas the sit-in will be held on DC Road on Thursday.

During the proceeding, the plaintiff said that a protest on Mall Road will badly affect business activities. The judge asked from PAT lawyer about the duration of sit-in and that who will be responsible if any terror incident occurs.

CCPO offered PAT to shift its sit-in to DC Road from Mall Road due to security concerns which was accepted on a condition to allow PAT chief to address today on Mall Road.

It is to be mentioned here that the high court had already banned protests and processions on Mall Road and the provincial government had also imposed section 144.

On the other hand, PAT completed its preparations to stage a sit-in on Mall Road. The workers set the stage near Istanbul Chowk, and special container for Dr Tahirul Qadri was also transferred to Nasir Bagh along with lights, fans and canopies.

PAT is carrying out sit-in against the injustice in Model Town massacre at the core of the city on August 16 and Punjab police operation at Minhaj-ul-Quran office which not only injured several people but also damaged property and resulted in the loss of over a dozen lives.