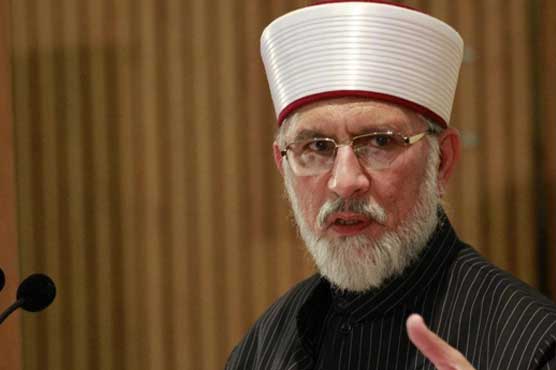 He lashed out at ex-premier’s reservation over his disqualification. He stressed that Justice Baqir Najfi’s report clearly establishes Shehbaz Sharif (Chief Minister Punjab) and his cronies as the culprit party in Model Town incident. He further targeted the Sharif family for the alleged corruption in the way how they amassed huge wealth and that the ‘rulers’ failed in clearing their name despite several chances, adding that Nawaz Sharif lied to the nation and stated false facts on the floor of the House.

Chairman PAT emphasised on the court proceedings that Supreme Court did not deal strictly with the matter of producing fake documents in the court, an act which is entitled to 7-year imprisonment. He said that Sharif family lied before the Joint Investigative team, which was constituted by the Supreme Court bench.

The PAT Chairman targeted the democratic credentials of the Sharif brothers. He said that no democracy exists for them if they are not in power. He repudiated Sharif’s defensive stance as he protested on the matter regarding authourity, which lies in hands of the Sharif-led government but no proper action is taken for upholding democratic values at hands of Pakistan Muslim League (PML-N). He targeted the political support base of Nawaz Sharif as he lambasted on the reaction of PML-N workers, who have raised slogans in support of their leader.

He expressed his anger regarding the aggression which occurred in Model Town incident but added further that it took time but Supreme Court decision vindicated PAT’s stance. The PAT Chief said that his followers and supporters gave sacrifices and justice should be served by handing over the Model Town case to the same JIT.

The PAT Chairman challenged ex-premier and Chief Minister Punjab as he brought up past incidents, indicating the struggle when PAT protested on G.T. road and asked for justice.

He mentioned that the same forum of Supreme Court gave the ruling, for which Nawaz Sharif became part of lawyers  movement. He attacked Nawaz Sharif on personal grounds as he said that he considers ex-premier’s name as derogatory remark. He said that Nawaz Sharif should abandon the  drama  of travelling through G.T. road and witness the strength of opposing forces gathered at Mall Road.

He added that the Supreme Court did not break the parliament but the ‘Throne of Lahore’ has its days numbered. He spoke about how the Panama verdict became ‘ray of sunshine’ as an opportunity to follow the case Model Town incident.

The PAT Chairman reached Lahore at 08:00 a.m. and was received by his supporters. Dr Qadri addressed the media and expressed gratitude to the people who came in solidarity regarding his cause. He said that his home is Pakistan where blood of the innocent was shed in broad day light. He projected the situation relative to upholding justice in the way Model Town incident would be precursor to a prosperous Pakistan, where the blood of poor, weak and innocent is valued and accounted.

He celebrated the court s decision as he stated that Article 62 fulfilled the goal after 4 years. The PAT Chairman announced that the future plan of action is a work-in-progress, which will be unveiled at the right time.