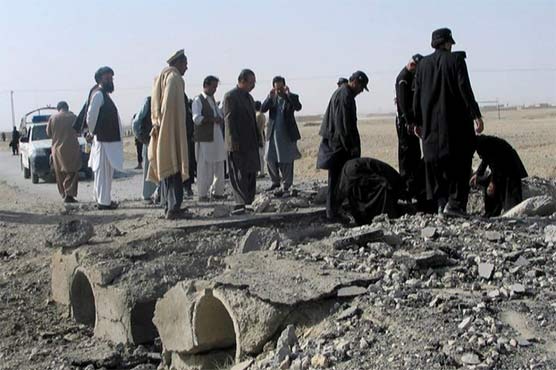 PANJGUR (Dunya News) – Four persons were killed in a blast that occurred within Panjgur district of Balochistan, situated near Pakistan and Iran border.

At least five people have been injured and admitted to local hospitals for treatment. Balochistan Chief Minister Sanaullah Zehri took notice of the blast and sought an immediate report from law enforcement agencies.

Balochistan CM expressed grief on the loss of precious lives, promising medical treatment for those injured. The blast took place on roadside in Cheeqgi area.

Sources told the blast happened due to explosive material. No terrorist organisation has yet claimed the responsibility of the attack. The Iranian forces had reportedly opened fire at rescue officials which delayed the process.

The officials of security forces took control of the situation by covering the area before rescue teams reached for medical assistance. The investigation has commenced as injured were admitted to tehsil headquarters hospital in Panjgur.