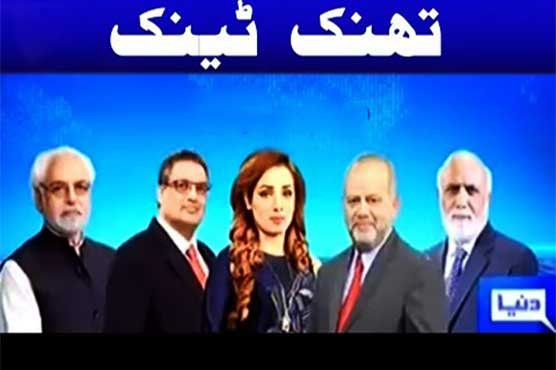 Haroon-ur-Rasheed said that these leaders will be replaced by someone else.

LAHORE (Dunya News) – Sohail Warraich, the group editor for Roznama Dunya, said while commenting on the aggressive behavior of the ministers of Pakistan Muslim League-Nawaz (PML-N) that the Panamana Joint Investigation Team’s (JIT) report and the Supreme Court’s (SC) verdict are apparently not in the favor of Sharif family.

Talking to Ayesha Naz, the host of program Think Tank, Sohail Warraich said PML-N has wasted the time to set its narrative. Referring to the press conference of four ministers of PML-N, he said the presser cannot have the same impact now that it might have had a month or two ago. The effectiveness of ruling party’s narrative after the announcement of decision will be reduced, he added.

Sohail Warraich said that the accountability of the elite and the privileged class is a very old wish of the middle class, and it is being fulfilled now in the form of Panama probe of Sharif family.

Senior analyst Haroon-ur-Rasheed backed Sohails Warraich’s comment and said he has analyzed the psyche of middle class beautifully. He added that not only accountability, but the resolve to take revenge is also present in them.

Haroon-ur-Rasheed bashed the government and said it seems like these leaders are ruling us for 50 years as their pictures are present in every advertisement, and they remain on television all the time. He also mentioned their TV ads.

Haroon continued that Prime Minister Nawaz Sharif wants to prove that he is the greatest cricketer of last 200 years. Not only cricketer, but also the biggest businessman, the best poet, and the finest singer, he said.

He said that nobody has stayed in the power forever, great leaders have come and gone, everyone has to depart, and these leaders will also be replaced by someone else sooner or later.

Famous columnist Ayaz Amir said that the incumbent government has drained out and are unable to rule further. Their faces have changed, power has gone, and the regime has lost control, he commented.

He added that the criminal investigation that is being held of the ruling family can be ended with the help of a referendum.

Acclaimed analyst and the group executive editor for Roznama Dunya Salman Ghani responded to the question regarding the political scenario after July 10 and said the report of Panama JIT is not as important as the verdict of the court, which should be respected.

He continued that the judiciary of Pakistan is independent and free, and an important decision is expected from the apex court.

Salman Ghani said the parliament and political leadership failed to do their work, and that is reason this case has gone to the courts. There is no use of government to take up aggressive behavior and to fight political war now, he remarked.