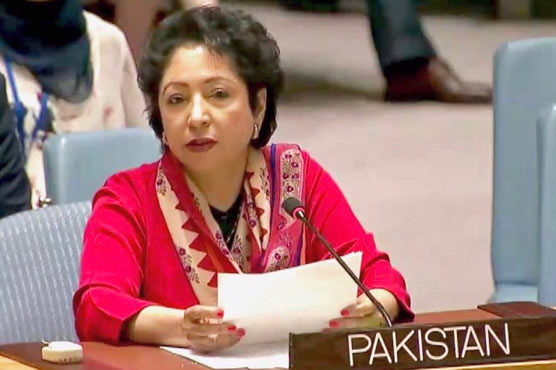 NEW YORK (APP): Big power politics have stood in the way of promoting peaceful solutions for Kashmir and Palestine questions, according to Pakistan’s Ambassador to the United Nations Maleeha Lodhi, who made a clarion call for major powers to help in settling the “two oldest unresolved issues” in the interest of global peace.

“Palestine and Kashmir are similar,” the Pakistani envoy said in an interview published in Al-Quds Al-Arabi, a widely circulated newspaper based in London, as she highlighted the two peoples’ decades-long struggle for the right to self-determination in the face of heavy odds.

“The question we ask in the Muslim world is: why is it that clear-cut Security Council resolutions on the two issues remain unimplemented? On Palestine, she said, the roadmap was very clear: the Security Council had continuously endorsed a two-state solution. What stood in the way was Israel’s intransigence to accomplish that objective. In the case of Kashmir, it was India’s intransigence in refusing to engage in negotiations with Pakistan aimed at finding a peaceful solution to the UN-recognized dispute. In the absence of any solution, she said more conflict would not be in the interest of the two regions.

“In both cases somehow, the dynamics of great power politics have to be addressed and that is the challenge,” Ambassador Lodhi added. Justice needs to be done in accordance with international law, morality, UN resolutions, while the collective voice of the International community was being cast aside, she said. At the same time, she noted when other issues emerge, they are taken up with speed.

“Obviously, the people of Palestine and the people of Kashmir have a very natural feeling of brotherhood and solidarity for each other, they understand each others’ predicament — the suffering of the Palestinians and the plight of the Kashmiri people are identical because the promises made to them (by the international community) have been broken.

“And those broken promises have led to a very, very dangerous security situation, both in the Middle-East and as well as in our part of the world.” In Indian occupied Kashmir, she said, the kind of human rights violations going on are unprecedented in scope and intensity, noting that those atrocities have been condemned by international media. The OIC — the organization of Islamic Cooperation — has in every ministerial meeting issued communique expressing solidarity with the people of Kashmir and calling for a peaceful resolution of the dispute.

“We are grateful to the Muslim world for standing with us, but I think what we do need is for the International community as a whole to respond to both the issues of Palestine and Kashmir. Both Kashmir and Palestine were not just cases of injustice, Ambassador Lodhi said, adding that these issues should be resolved because they could fuel the kind of tensions and conflict that could suck in many more countries than they already have.

In South Asia, Ambassador Lodhi said that as the dispute involved two nuclear neighbours, Pakistan has always advocated a peaceful settlement “because that is the only path to take.” Responding to a question, Ambassador Lodhi said Pakistan has and will always stand by the people of Palestine. “We are prepared to do and we have already done whatever is required … we also raise our voice at the United Nations.” There was need to forge unity in the Ummah so as to effectively focus international attention on the the issue. The OIC must speak with a united voice.

“We see divisions in the Muslim world today that need to be addressed as lack of unity plays into the hands of our enemies.” So, I think the Muslim world has to rise above these differences but these must be addressed by ourselves.” As far as Pakistan was concerned, she said, the country had faced many challenges but it was turning the corner both in the security and economic fields. “We are now an economically stable and growing country which is becoming a very attractive destination for foreign investment,” Ambassador Lodhi said.

On the security front, she said Pakistan had managed to beat back the forces of terrorism and extremism, but the job will not be complete until the long war in Afghanistan comes to an end. Since the tragedy of 9/11, Pakistan has always advocated a political solution in Afghanistan, the military option had been tried and it had not resolved the problem. Pakistan has consistently called for insurgents to be brought into the mainstream.

The suffering this causes to the peoples of the two countries should be brought to an end , she said, adding that Pakistan still hosts more than 2 million afghan refugees as a result of the Afghan war. No country has done more than Pakistan to dismantle and to eliminate

Al-Qaeda from the region, the Pakistani envoy asserted. “That doesnâ€™t mean there is no Al-Qaeda remnant left in our part of the world but the extent to which it exists is now nothing compared to the situation that it existed 16 years ago, and so Pakistan must get credit for it.”

Pakistan fought that war because it was also in its own interest. Noting that tens of thousands of lives have been lost, she said, Pakistan has been a principal victim of terrorism, but remains determined to eliminate the last terrorist from the country. The United Nations acknowledges that terrorism cannot and should not be linked with or be associated with any religion. But despite that international consensus, there were vested interests in certain countries who want to tarnish Islam by equating the two. “We reject this as a form of racism, as a form of discrimination, as a form of Islamophobia that is vident from time to time”. Pakistan, among the OIC countries, has been in the forefront of raising

its voice against Islamophobia at the United Nations, Ambassador Lodhi said, while calling for a dialogue among civilizations. At the same time, she said Pakistan opposes foreign military interventions in the Muslim world, citing the “illegal” invasion of Iraq. The countries that carried out such invasions without any thought, had to then face unintended consequences of such actions.