Pakistan not bound to implement US designation of Salahuddin: Sartaj 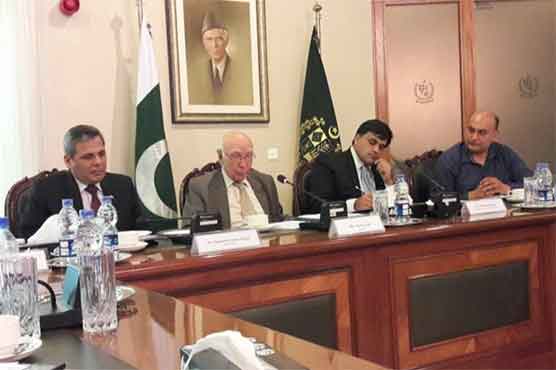 Pakistan would continue humanitarian and diplomatic support of Kashmiris

ISLAMABAD (Dunya News) – Foreign Affairs Advisor to the Prime Minister (PM), Sartaj Aziz has said on Monday that Pakistan is not bound to implement decision of the United States (US) regarding designating Syed Salahuddin, senior leader of Hizb-ul-Mujahideen, a global terrorist.

In a briefing given to the Kashmir journalists forum, Aziz said that India has failed to brand freedom movement terrorist activities and that the struggle of Kashmiris has reached a high point.

He said that Pakistan would not hold talks with India unless Kashmir dispute is included in the agenda. He held invaluable sacrifices of Kashmiris responsible for India’s failure of brand the ongoing movement terrorism.

Aziz said that the Salahuddin was designated a global terrorist by the United States (US) and the decision was not that of United Nations Organisation (UNO). He said that the people of Gilgit-Baltistan (GB) and Azad Kashmir were being given power without influencing Kashmir dispute.

Sartaj Aziz said that Pakistan would continue humanitarian and diplomatic support of Kashmiris.

Shutdown being observed in occupied Kashmir against killing of civilians