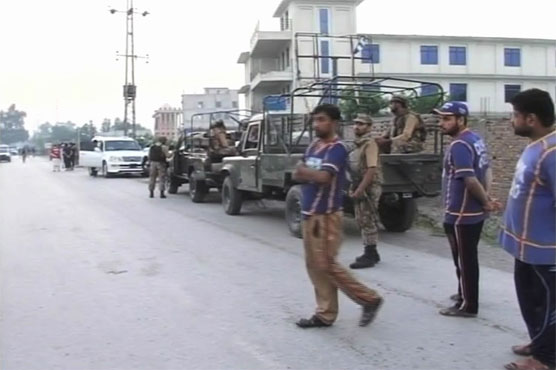 Three police officials, including an SHO, were also wounded in exchange of fire with terrorists.

PESHAWAR (Dunya News) – At least two terrorists of a banned outfit were killed in encounter with security forces and police in Chamkani area of Peshawar in the wee hours of Saturday, Dunya News reported.

According to details, police and security forces raided a compound in Chamkani area on intelligence report during which terrorists hiding in the compound opened fire. The law enforcement agencies returned the fire as a result two terrorists were killed.

Three police officials, including an SHO, were also wounded in encounter with the terrorists which lasted for three hours. The injured cops were immediately shifted to hospital.

The security forces declared the compound clear after a search operation and hoisted Pakistan flag on the building.

According to IG Khyber Pakhtunkhwa, the dead terrorists belonged to a banned organization and were involved in several cases of bomb attacks.