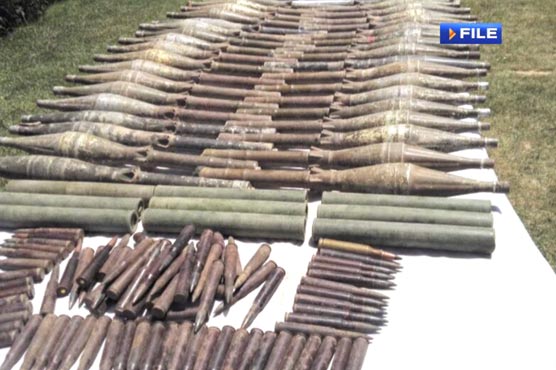 Law enforcement agencies received intelligence information about huge cache of weapons in Gahi Khan Chowk area of Quetta. Terrorists had hidden a variety of advanced weapons underground to use against regional peace.

Weapons and explosives were recovered from the secret hideout. The cache includes 503 grenades, five locally made IEDs, one RPJ7, two rifles, 22 RPJ7 bullets, 18 fuse and thousands of bullets.

ISPR stated that the weapons were hidden underground to conduct terrorist activities in coming future.

Moreover, another raid was conducted in Balochistan with respect to Operation Radd-ul-Fasaad whereby four terrorists were killed and two arrested. The secret hideouts set in Awaran district s mountain ranges were destroyed by the security forces and cache of weapons was discovered.