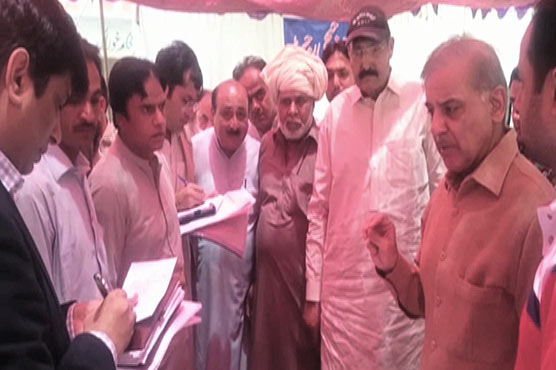 Upon arrival from China, Shehbaz Sharif visited the procurement center to assess arrangements

WAZIRABAD (Dunya News) – Chief Minister of Punjab Shehbaz Sharif suspended the incharge of wheat procurement centre owing to the poor arrangements. He visited the centre after returning from China visit.

Punjab Chief Minister visited various districts of Punjab and analysed the agrarian activities. One of the assessments underwent in Wazirabad where poor arrangements were made in the wheat procurement centre.

The administration was reported to be unaware of Shehbaz Sharif’s sudden arrival. The incharge looked surprised with his visit when he started to check the records.

While the sudden visit, Punjab CM talked to farmers and asked about their concerns.

He listened to their queries and vowed to work for best interest of the people.

Earlier today, he reached Lahore after concluding the China summit for  unprecedented project . He asserted the One Belt One Road summit to be for the wellness of humanity, adding that it would bring success and development in the country.

He also praised the Chinese President Xi Jinping during his speeches in the neighbouring country, calling him a great leader with wisdom.