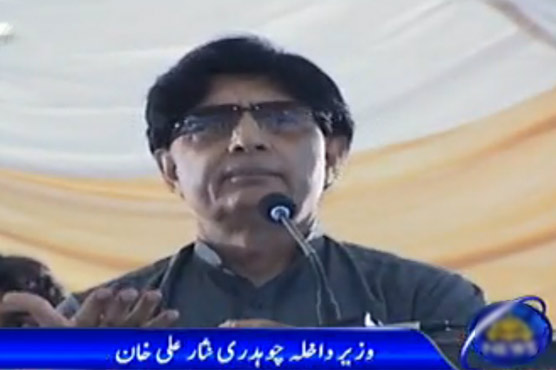 Security forces had warned the Interior Ministry of terror activities on May 1 and suggested to postpone the ceremony. However, despite security threat, Nisar insisted to visit the POF complex.

While addressing to the attendees at Labour Day ceremony in Cantt, Nisar alleged former President Pervez Musharraf of imposing black law on over 2000 workers in POF.

Interior Minister told if labourers are not safe then he doesn’t care about his own protection, adding that the Labour Day ceremony will occur as per the schedule.

The ceremony was attended by various federal ministers. In one of the statements, he said if security agencies cannot protect POF complex then it raises questions about their ability.

Sources said there is a security threat in Wahh Cantt during Labour Day and advised ministers not to attend the ceremony. Nisar, however, refused to cancel his plans.