The government has issued a notification on Saturday.

ISLAMABAD (Dunya News) – Implementing the inquiry committee’s recommendations on the issue of Dawn leaks, the government has removed Tariq Fatemi from the post of Special Advisor to Prime Minister on Foreign Affairs.

“The Prime Minister, having considered the findings of the Committee as to its terms of reference is pleased to approve its recommendations in para 18 of the report,” stated a notification issued by Secretary to the Prime Minister on Saturday.

The notification stated: “Allocation of portfolio of Foreign Affairs to Syed Tariq Fatemi, Special Assistant to the Prime Minister, shall be withdrawn. Necessary notification in this regard should be issued forthwith”

The government has also ordered action against Principal Officer of the Minister of Information Rao Tehsin Ali under the E&D Rules 1973 on the charges based on findings mentioned in the report.

Moreover, the government has decided that matter pertaining to the role of Daily Dawn, Mr. Zafar Abbas and Mr. Cyril Almeida will be referred to All Pakistan Newspapers Society (APNS) for necessary disciplinary action against them.

“The APNS shall also be asked to develop a Code of Conduct for the print media especially when dealing with issues relating to security of Pakistan and to ensure that stories on issues of national important and security are published by abiding basic journalistic and editorial norms,” the notification stated. 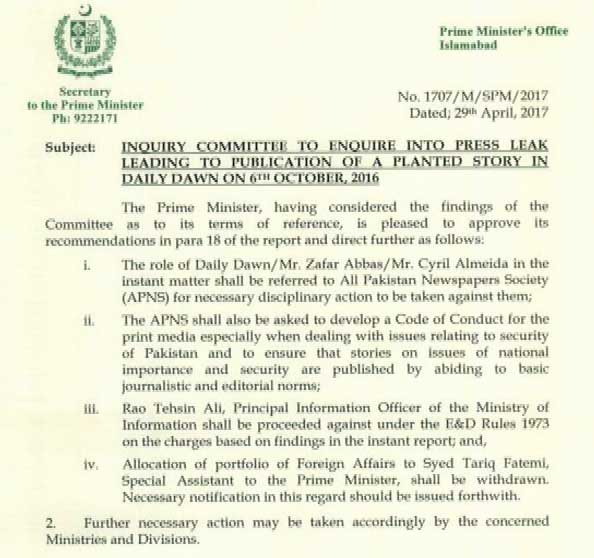 Copy of notification issued by the government.

The inquiry was initiated to identify the source of an article published by journalist Cyril Almeida in Pakistan’s English-language newspaper Dawn, which gave an account of a tense, high-level security meeting held between military and government officials.

Pakistan army had dismissed the story as “unfounded and planted” and called for a probe into the leak.

The prime minister’s office had also stated that the story was "planted" and termed it a "breach of national security", whereas, Dawn newspaper editors stood by the article and its author.

Analysis: US media could bring Dawn leaks report to surface