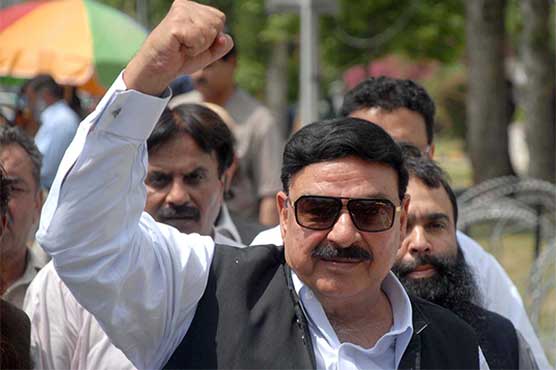 ISLAMABAD (Dunya News) - Awami Muslim League (AML) Chief Sheikh Rasheed Ahmad on Friday has taken the responsibility of bringing opposition parties on one platform as he is all set to meet Jamat-e-Islami (JI) Chairman Siraj-ul-Haq in the evening.

Exclusively talking to Dunya News, Sheikh Rasheed said that he has taken charge to gather opposition leaders in protest against Prime Minister (PM) Nawaz Sharif. He said that opposition needs to put pressure on PM for his resignation.

AML chief announced that he will be meeting Siraj-ul-Haq at Lal Haveli in the evening to take him into confidence regarding strategies against the premier.

Earlier today, the opposition parties unanimously demanded Prime Minister Nawaz Sharif to step down from the post till completion of probe by the Joint Investigation Team.

Opposition senators participated in the Senate and National Assembly sessions with black ribbons tied on their arms as a gesture to record protest.

Siraj for immediate merger of FATA with Khyber Pakhtunkhwa

'Govt should ensure death sentence against Jadhav carried out'

We need to set example for country’s enemies by sentencing Jadhav: JI Chief