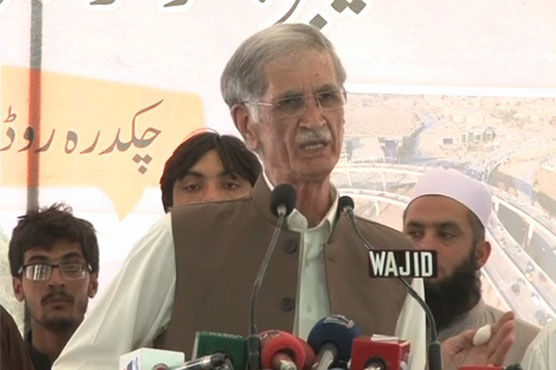 He apologized from the children for halting their trials and forcing them out of the ground.

While addressing a ceremony in Peshawar, he said that he had no knowledge that the helipad was made in the sports ground.

He apologized from the children for halting their trials and forcing them out of the ground.

KP chief minister asserted that the incident happened due to the mistake of DC Abbottabad for which a notice has been sent to him.

He said that he is fully aware of his powers and know well to utilize the resources.

He pronounced that he is not CM ‘Showbaz’ and uses his power while remaining in his limits.

Khattak told that party leaders were sent a day before to resolve the issue of Kohistan Bhasha Dam’s royalty.

He said that propaganda is being done against their government regarding the expenditure of budget. KP chief minister asserted that development budget will be spent wholly in the current year.

He said that he will hold talks with army chief regarding handing over Qila Bala Hissar to provincial government.

He declared that Peshawar’s mass transit train project will be completed till January 2018 and will link the four districts with each other.