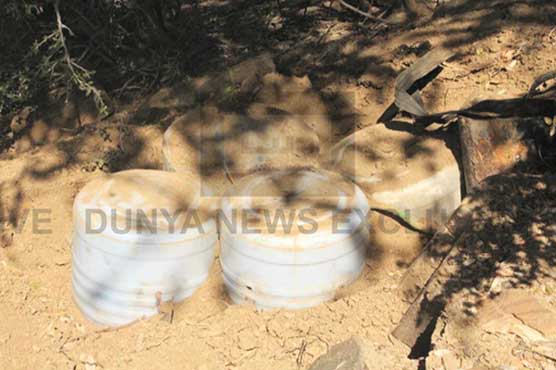 Scope of search operation has been expanded after recovery of explosives.

PESHAWAR (Dunya News) – In a major achievement in ongoing war against terrorism, the security forces have seized a huge cache of explosives buried in North Waziristan tribal region.

According to security sources, the explosives stashed in large drums were recovered during a search operation in Zawar Naray area.

Scope of search operation has been expanded after recovery of explosives.

On Wednesday night, Pakistan’s military announced a major new nationwide operation to deal with militancy in the country in the wake of a string of terrorist attacks.

The operation, called Radd-ul-Fasaad, which translates to ‘Elimination of Discord,’ has been launched to "eliminate the menace of terrorism".

On Thursday, at least eight people were killed and another 21 injured when an explosion occurred at a restaurant in Defence Z Block in Lahore.

Last week, another two bomb blasts, one in Sehwan and another in Lahore, claimed lives of more than 100 people and left hundreds more injured.

Operation Radd-ul-Fasaad is the first since Operation Zarb-e-Azb, which started in mid-June 2014 in North Waziristan.