On this day in 1974, Lahore hosted the fated leaders of Islamic world 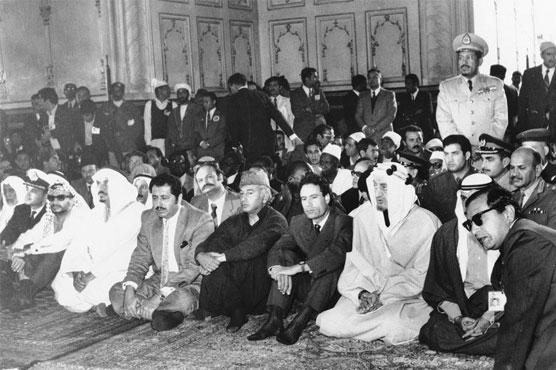 Bhutto, Mujib, Shah Faisal, Sadat, Arafat, Gaddafi; all died unnatural deaths in one way or other

LAHORE: (Web Desk) – On February 22 in 1974, Lahore hosted all the leaders of the Islamic world in the summit of Organisation of Islamic Cooperation (OIC). The city was jubilant as its hero Zulfikar Ali Bhutto presided over the summit, which some of the biggest names in the global politics of that time were attending.

At that time these leaders probably had no idea of what laid ahead for them. Some of the most shocking news headlines were going to hit the TV screens and newspaper front pages over the next few years.

It started from Shah Faisal of Saudi Arabia. On March 25, 1975, just about a year after this summit, Shah Faisal was hosting a delegation from Kuwait in which one of his half brothers was also present. He was the brother of another of Shah’s half-brothers Prince Khaled bin Musaid. Faisal bin Musaid had been living in the United States for the last few years. However, that fated day he was able to sneak into the king’s palace and as Shah Faisal leaned forward to kiss his half-brother, Faisal bin Musaid took a pistol out of his pocket and pulled the trigger. One bullet hit the king in chin while the other one shot through his ear.

Shah Faisal was taken to the hospital but couldn’t survive. It is believed that Faisal bin Musaid killed the king in order to avenge his brother Khaled bin Musaid, who was shot by a police officer during a protest against the shah in 1966.

Less than five months after the assassination of Shah Faisal, Bangladesh founder Sehikh Mujib ur-Rahman was murdered by his army. Mujib had applied for the membership of OIC in 1974 and had visited Lahore to attend the summit that same year. His visit had watered down the tensions between Bangladesh and Pakistan to some extent and also marked the joining of Bangladesh in Organisation of Islamic Cooperation.

On August 15, 1975 some army soldiers broke into the presidential residence and assassinated Sheikh Mujib along with his family. The current Bangladesh Prime Minister Sheikh Hasina Wajid and her sister Sheikh Rehana were the only members of the family who escaped death that day as they were on a visit to Germany. The coup had been plotted by the military officers and some of Mujib’s colleagues in Awami League. It was widely speculated that the assassination had been planned by Central Intelligence Agency (CIA) of the United States.

Zulfikar Ali Bhutto had played the pivotal role in this massive event. He had used his diplomatic skills to perfection in making possible this summit which had combined all the leaders of the Islamic world on one platform. Pakistan was at that time struggling to find its feet back after the defeat at the hands of India in 1971 and the consequent secession of Bangladesh. It was a landmark achievement of his government that it was able to make Pakistan the center of the world attention once again but for all the positive reasons this time. In this way, he had also ended Pakistan’s isolation in the world community.

But things were not meant to remain rosy forever. In 1977, Bhutto’s Pakistan People’s Party won the general election in a landslide. The nine-party alliance opposing him claimed that the election was rigged and the subsequent movement resulted in General Zia ul-Haq’s coup on July 5, 1977. The Zia government then tried Bhutto for the murder of Muhammad Ali Kasuri, the former PPP leader who had fallen out with Bhutto. The court decided the case against Bhutto and sentenced him to death in an unprecedented 4-3 split decision. Bhutto was executed on April 4, 1979. One of the members of the bench Justice Nasim Hasan Shah later admitted that his sentence could have been reduced.

President Anwar Sadat of Egypt was yet another Muslim leader who had attended the summit and was later murdered in a plot by Khalid Islambouli of ‘Islamic Jihad’ (Tala’at Qasim of Gama’a Islamiyya later claimed that the group wasn’t Islamic Jihad but his own organisation).

Khalid Islambouli murdered Sadat during the parade as he was observing the troops. Islambouli was a lieutenant in the Egyptian military.

The fatwa against Sadat had been obtained from Omar Abdel Rahman, a blind cleric who had lived in the United States for most part of his life. He died last week on February 18, 2017 in North Carolina.

Yasser Arafat was the chairman of Palestinian Liberation Organisation (PLO). He had also joined the conference in Lahore in 1974. One of the most influential figures in the entire Israel-Palestine conflict, Yasser Arafat was allegedly poisoned by the Israeli intelligence agency in 2004. Although it has been a subject of much debate as to what was the cause of his death, it is almost universally believed now that though the Palestinian leader did have HIV in his blood but it was poison that caused his death.

Muammar Gaddafi dragged through the streets of Sirte

Muammar Gaddafi was the last of the great leaders of this conference to have been assassinated. On October 20, 2011, the Libyan president Colonel Muammar Gaddafi, who had taken over the country in a coup d’etat in September 1969, was found by the rebels in a drainage pipe hiding from the NATO bombing. Gaddafi had been running from one place to another ever since he had retreated to Sirte after Tripoli’s fall to the rebels during the Libyan Civil War. 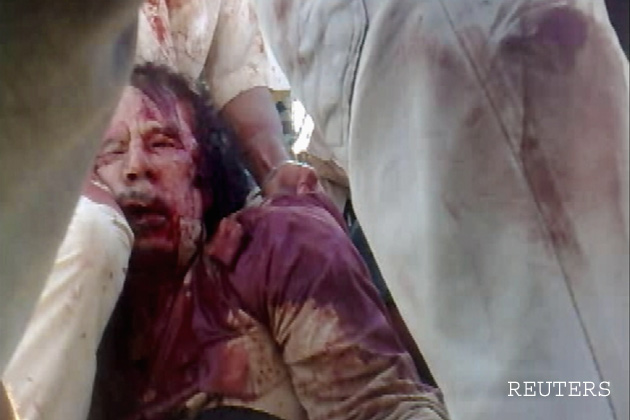 He was trying to reach Jarref Valley that day when his convoy was attacked by NATO bombers. He took refuge in a drainage pipe as his guards fought the rebels. He had already suffered head injuries during the bombing. As he was found almost fatally injured by the angry rebels, Gaddafi was lynched and then dragged through the streets of Sirte.

The story has been written by Ali Warsi.

Saudis haunted by memories of 58-day rainfall in 1956